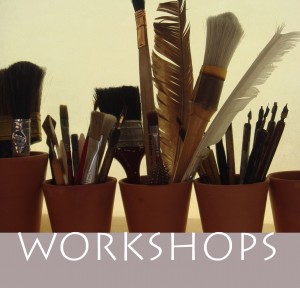 Oil Painting for Starters: Oil painting is actually surprisingly easy! But the equipment list can be daunting – so at Limetrees Studio, all your equipment is supplied as part of the course. These are 2 session courses on Tuesday mornings, or occasional Saturdays. There are also some weekend workshops.

I teach art-based workshops for calligraphers at societies around the country.

I’ve taught in South Africa, Belgium, UK and Australia. I love teaching enthusiastic beginners and empowering people by tapping into their creativity. Here is a list of typical workshops; you’re welcome to choose from this selection or I would be happy to design a workshop based on your group’s needs. If you Browse the Blog archive in the right hand column, under the correct month (and page), you’ll find out more about actual workshops that have been run.

I love teaching drawing because I believe that anyone can draw; it’s just a matter of unlocking the ways of seeing:
Drawing words and writing pictures: BLOG: February 2011 – p3; June 2012 – p5;

Colour fascinates me, especially watercolour in:
Skating on thin ice
The double page spread
Beyond the Colour Wheel
Diptych
Through the looking glass

But there is always room for good formal calligraphy which is an essential introduction to calligraphy:
Uncials: the best initial introduction to calligraphy. It’s accessible and you learn pen control.
Gothic: an excellent follow up from Uncials teaches rhythm and straight lines. BLOG: March 2014 – p2 & 3
Italic: The love of my life. It starts formally, but can be cursive or even expressionistic. BLOG: June 2012 – p2 & p4

And the latest series, still unfolding – combines printmaking and lettering:
Lino cut letters: Backward and inside out

Don’t forget to view the blog, under workshops