I am honoured to have been nominated to do the #tendaychallenge by su@bonfanti.

As a sequel to the Instagram posts I am giving more detail on my blog.

Day 2:  As a young artist in South Africa in the 70’s we took inspiration from the UK and USA (refer to Modernists and Mavericks by Gayford, to get the mood!). Our work was abstract, hard-edge and explored shapes and space.

Forty-five years later, in 2016, I came back to oils as an art teacher, graphic designer and word artist, never having painted a ‘proper landscape’. 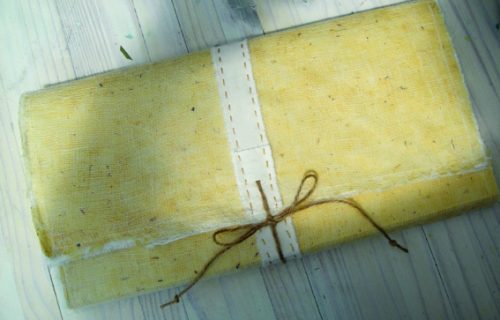 If I was in the ‘landscape’ I would paint a tiny detail, as you can see in this book I made (bound into an artists’ book) from a Safari trip in the Kalahari in 2011. My best opportunity to paint was while everyone had their siesta. I extracted details, words and colours, painting in the heat of the day at 38 – 40 degrees in the shade! It was very difficult not to have perspiration dripping off my face onto the pristine paper, which I had pre-torn into sheets. 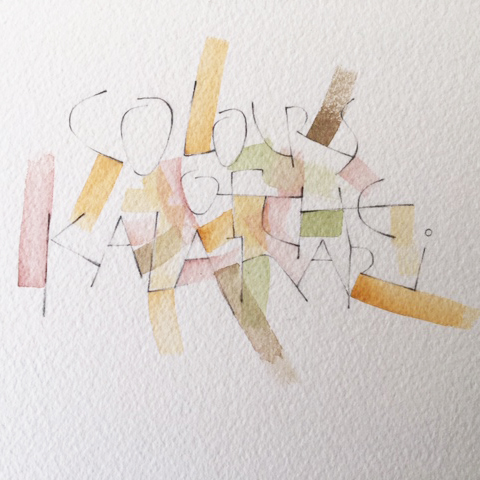 I’m not a wild-animal artist, but I wanted to give a sense of what the safari was like – such as the endless plains of grass with just a glimpse of sable antelope horns. Each painting has some words as part of the image, but later I also I designed a text style and wrote some additional text on alternative pages later at home when I made the book.
(It is very difficult to get good photos of pencil-work, so, a disclaimer!) 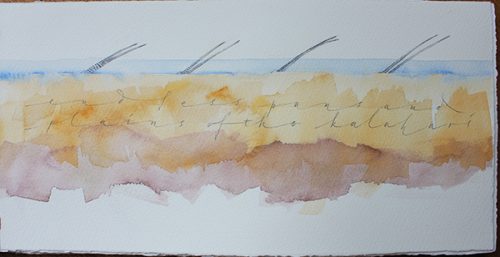 ‘endless pans and plains of the Kalahari’

The largest sand-basin in the world,

the endless flat grassland of the Kalahari,

stretches across the plains for 2,500km

and into the blue horizon 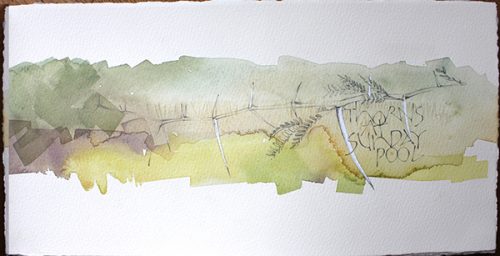 An unusual eruption of green

in the Central Kalahari as an aftermath of thunderstorms.

Tiny leaves on the Acacia

and the thorns deter the herbivores from feasting 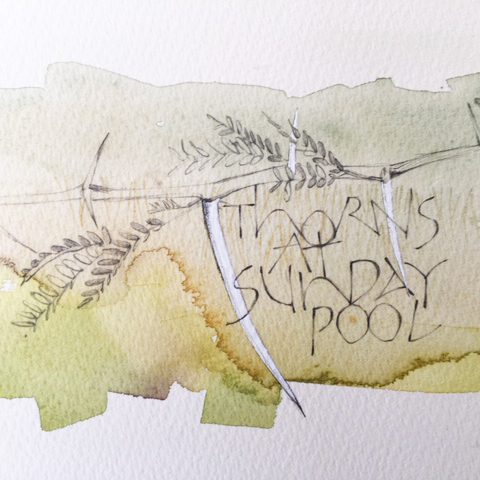 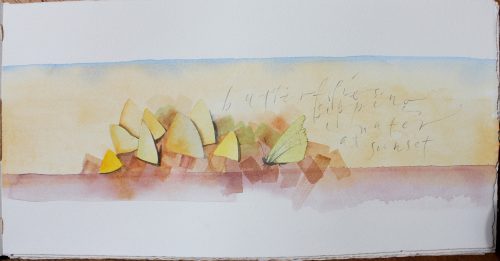 in the Kalahari sunset.

are studded with the silver grey, and now

with the fire-blackened Trumpet Thorn and its white flowers,

and the occasional tree such as

with its protective reddish-brown pods. 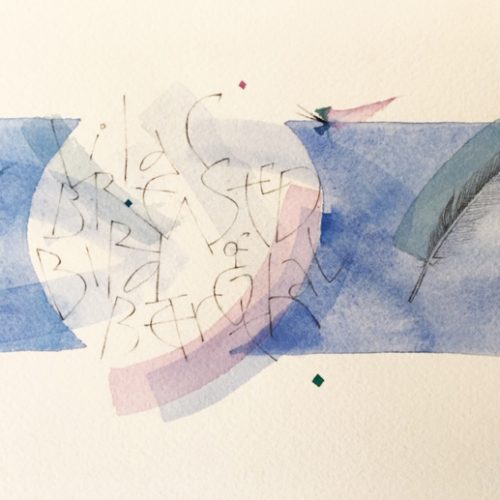 is an iridescent little bird.

With a flash of lilac and turquoise, it flies

from one branch to another.

Traditionally a young Zulu girl will receive one

– an ‘ifefe’ as a gift from her intended.

This book has nine watercolours – one for each day in the unforgettable Kalahari.

Thank you to Karel and Heleen de Haas for the idea, the invitation,

the holiday and above all for their friendship.

Although the Kalahari boasts vast numbers of animals they are difficult to see because of the size of the area and the scarcity of water. However we saw all the species of buck, wild dogs (which is unusual to sight) and on the last day on our final sunset drive we spotted the elusive black-maned Kalahari Lion. What a Grand Finale!