« Previous: Caroline Chappell – Abstracting the Landscape- part 2
Next: My Sketchbook – looking back »

In the previous post I chatted about Caroline Chappell’s method of making working sketches and visual notes. Kurt Jackson’s sketchbooks are an end in themselves and function as independent artworks.

Sketching is one of the things that we all believe in but seem to find it really hard to do. I mean, how hard is it to draw for ten minutes a day? And anyway, why would we want to? 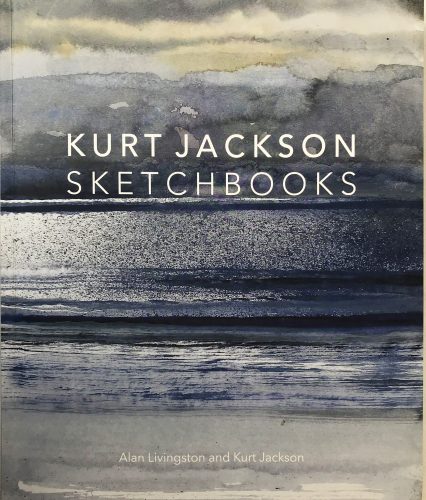 This is a must-read! I can’t show examples of his work other than the cover of his book – but I’ll give you links… and show some of my own materials.

I found Kurt Jackson’s concept of sketching very inspiring and I wonder if I could make myself try some of his methods. I drew every day for three months when I went to Singapore and Australia, (see the next blog post) and since studying Jackson’s methods I can see what might have improved my experience. After reading and studying this gem of a book, I yearn to do more!

If you follow this link: Kurt’s Sketches, you can see some of his beautiful drawings.

IN A NUTSHELL
What size are his books?
He uses 3-4 different sizes depending on the occasion. They are hardbound or spiral bound, with good quality 160gsm paper.

What medium does he use?
Whatever is appropriate for the occasion. He uses a huge variety of materials (more about this later).

How long does he take to do his sketches?
Anything from two minutes to perhaps occasionally 30 minutes.

Where does he do his sketches? Everywhere. Walking along the street, in pubs, on the train, at the sea, while visiting friends, at Glastonbury.

How does he use his sketches? Jackson insists that his sketchbooks are one of his artistic expressions and an end in themselves. Sure, some lead to paintings, but they range from visual note-taking and mark-making to full-on artwork, paintings and collages. He will sometimes complete a sketch – adding colour – at home.

How does he feel about his sketches? He values them and regards them as his personal note-taking, in the way other people take snapshots. But he doesn’t judge or assess them critically – they simply ‘are’

What about the weather? Kurt paints regardless of howling storms, inclement weather, etc. His Glastonbury paintings had glue mixed into the mud to use it as a medium! He will paint or draw in unbelievably uncomfortable situations. He doesn’t mind and even embraces the fact that the splash of water from the canoe oar affects the water-soluble pencil. But he doesn’t take his sketchbook on the canoe in case they capsize. He draws on loose paper and sticks it in the book later.

What are his subjects?

What are his stylistic characteristics /peculiarities?

What about his huge variety of materials

I would imagine that on each outing he plans the way a mother plans meals for a baby. In fact his luggage can’t be more complicated than that of a mother! He obviously plans what to take and selects his colours carefully – you are aware of his ‘limited palette’ Every now and again he is caught out wishing he had another means to draw, but mostly he has what he needs available.

What can I take home from this?

I would not have dreamt of taking acrylic on a picnic! It dries so fast. But I am reviewing this bias; and there are wet-palettes. (Try this link to you-tube on how to make a wet palette) I think that acrylic makes a real difference – you don’t have to get scared you are overworking a watercolour and you can add white on top not trying to keep the precious white paper. Also the colour is much stronger. Watercolour can be very wishy-washy.

But what I think I have learnt from seeing his work is that I was far too precious about my sketchbook. I used loose paper, cut and folded to bind later, in case I messed up. He has a variety of books which he gradually fills. If he messes up he can tear pages out or glue pages together. He adds bits of collage – often a word or date relevant to the sketch.

I thought that each sketch must be lovely – but I can see the value of using sketching as one would think aloud, doodle, explore. Explore the subject and the medium. Loosen up. Get real.

The more you draw from life as opposed to drawing from photos, the more you learn how to read Nature and then you can improvise on the canvas and work more intuitively.

I thought that one ought to sketch before painting to study the subject (not that I do) – but he sketches for the sake of sketching. The best thing is that he doesn’t need a camera. Cameras dull colours and flatten space, and we start getting addicted to the sort of reality a camera gives. They are still useful, but as an extra not as the only record.

In my next blog I am going to show you some of my favourite sketches I did while in Singapore and Australia. The we can look at this blog again in a year’s time and see if I have done any sketching and if I have made it part of my working schedule. Oh, and check to see if I have improved.