Here are some bits and bobs before I move to part 4 with my landscape studies.

While exploring my art direction I toyed with the idea of doing naïve paintings of buildings.  The Chilton Post Office was done as a commission at the end of 2015, and the other two in 2016. I enjoyed doing these but they are really labour intensive, so would only work for me as commissions.

I also designed a series of cards for the UCARE project.

The book ‘Your Best year Yet’ by Jinny Ditzler’  helps me analyse the year and set goals for the new Year. This kind of analysis is not everyone’s cup of tea, but I like her take on personal planning. So below you can see my 2016 highlights were. I’ll do my goals in another post, but..

One of my main goals for 2017 is to stick with one medium and create a very cohesive portfolio. Or maybe two portfolios – one of still life and one of contemporary landscape. I get way-laid very easily, as you can see. In 2016 I gave a few months of painting to UCARE in order to take part in Art in Action. Because I am still experimenting it was sort-of useful, but I could have just given a generous donation instead! In 2017, we shall have the ‘new focussed me!’

Sadly I have not had time to do monoprints at Oxford Printmakers, but this will happen. I have also been on a few one-two day oil painting courses to catch up on materials and techniques that have changed since I left oil painting all those years ago. Sophie Ploeg, Martin Taylor and Kieran Stiles have all been very helpful.

Here are a few shots of my studio with me at work and my students painting. 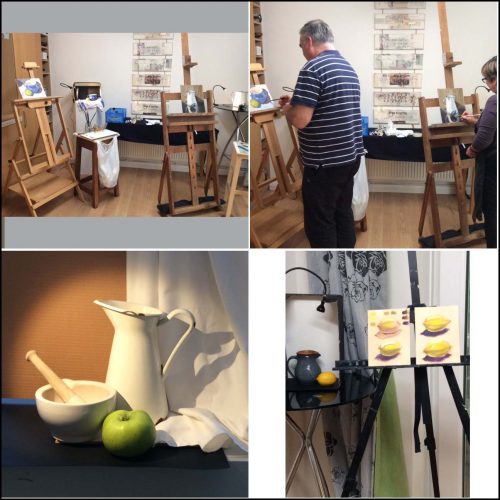 Teaching happens here and in the conservatory – for about 6-7 students at a time. I am teaching absolute beginners and sort-of beginners. My approach is to start with observational drawing and painting working with tonal masses.

In August 2017, I hope to run a second class which will include landscape walks, sketches and digital photos, with a formal landscape in-studio painting class once a week.