« Previous: Top tips for daily drawings, paintings or photos
Next: Reflections – My year in paintings 2016: part 2 »

At the end of each year I like to look back and do a visual summary of my paintings. It may seem indulgent and in fact it is, in that this is for my own records, so that I can check which way I am trending. However, you may find it interesting, even though it is sort-of personal stocktaking!

I also set my artistic goals for the following year and by being public about these I am also answerable! Each year I go through Jenny Ditzler’s ‘My Best Year Yet’, and this year I am on such a high about my change in direction and the excitement (rediscovered) of painting in, and teaching oils, that I can only say: “Yessss!”

So to start with: My daily paintings.

JANUARY: The first four pieces all had more work added to them a few months later. Only the bottle was kept as it was! 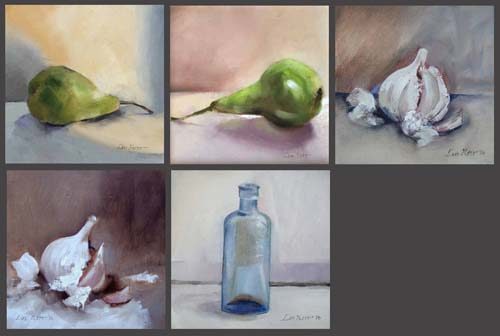 FEBRUARY: I was alternating between fruit and bottles and loving the beginnings of Spring with its snowdrops. There is a looseness in the fig paintings which I lost and have only just ‘found’ again. This is to do with relaxing, using a big (clumsy) brush and not getting over involved in detail. 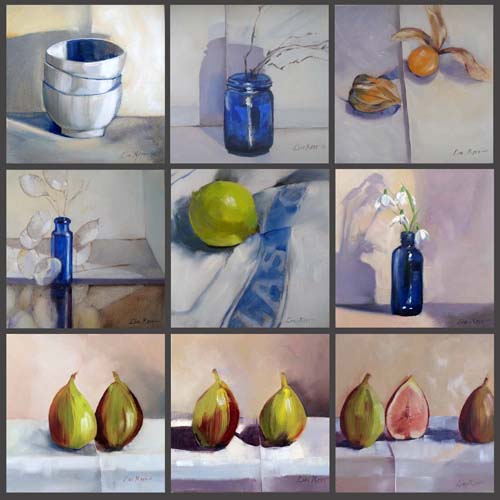 MARCH: More of the popular Spring blossoms, building confidence in painting coloured glass and the rose. Ahh, the rose. This was a struggle and somehow I pulled it off. While painting it with friends, we heard that one of our “Open Book” members, Lois had passed away. In the end I just completed it and dedicated it to her. Jill put the rose I had copied into Lois’ garden, and now owns the painting.
The plums eventually got their ‘bloom’ and the pomegranate was a first attempt at palette knife painting. I felt that the palette knife is not for me (I reviewed this in October/November) 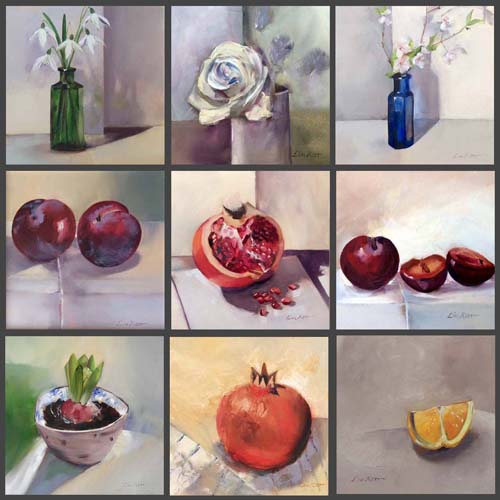 APRIL: I enjoyed the challenge of the primroses although the result is a bit chocolatey boxy. My favourite one is the middle right. Flowers are popular but I still like the plain bottles. The bottom left bottle has a painterliness, but somehow I don’t have the courage to quite go that route. Another rose I did battle with! This is a theme I will definitely follow-through with in summer. Analysing how to go about it. 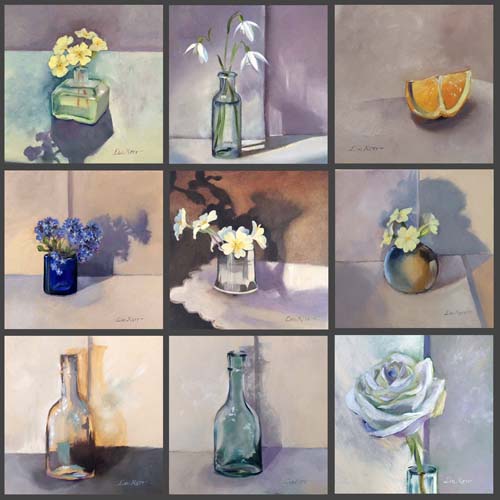 MAY: A chance to do some pure bottles at last. I am disappointed that the flowers sell so much quicker when to me the bottles ‘say more’ as a painting. So enjoying the light and reflections, and the sense that each bottle is a precious object. The dandelion is from June, but sneaked in… 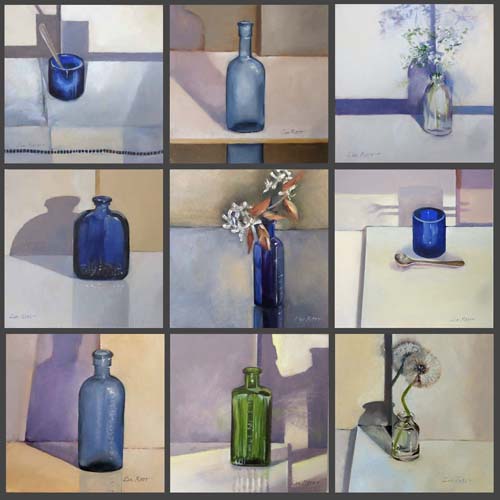 APRIL & JULY tulips: The first few are a trial run for Art in Action where the theme of my tent is UCARE, the charity for urology cancers. Tulips in a small format are a challenge as a tall single tulip is boring and most of the tulips I like are white, but there are more pinks, reds and yellows than any other. These are not my colours! And during Art in Action, tulips will be out of season. My solution was to paint from photographs, mostly taken by my brother Des Vlietstra, have dark backgrounds and try impasto. 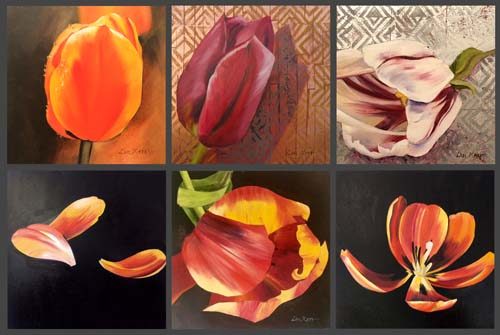 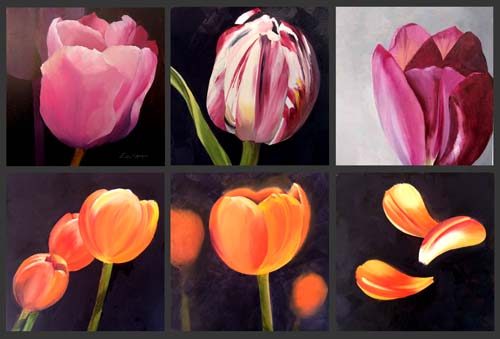 JUNE: Dandelion in the right month now. Loved painting this one. The onions were a commission. You can tell that June is an otherwise busy month – completing large paintings, teaching at Oxford Summer School, recovering form Artweeks and taking part in Art in Action.

AUGUST: (towards the end of August…I decided to ‘get ahead’ for 2017 Artweeks with my little paintings and decided to paint a series of jugs and berries. I have swopped from MDF board to canvas as an experiment. And I love it. The canvas is ‘medium weave’ although I find it quite coarse.

SEPTEMBER and OCTOBER: I now officially collect little white jugs. Even though these are for Artweeks 2017, I sold the raspberries (top centre) and gave the middle centre one to my daughter in law for her birthday. That one is also my favourite.
There are two almost conflicting things happening – I am loosening up and daring to show raw canvas on one hand, then going for a super-realism on others. Still in love with shadows. Check out the December raspberry one – after a long break and experimenting with loosening up… 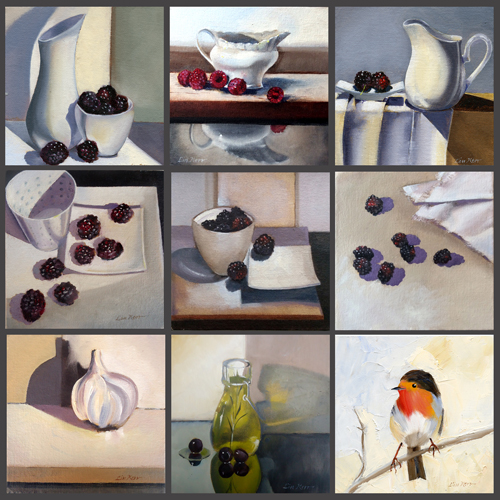 NOVEMBER: My granddaughters have asked for paintings for Christmas and birds are nice for 6-10 year olds. I thought it would be a good moment to work harder at thick brush impasto for the birds combined with palette knife painting for the backgrounds. The first one was a little robin, (above) which a fellow artist bought for her grandmother’s 99th birthday. I did a similar one later for my youngest granddaughter and her sister chose the Bluetit. They have bluetits visiting them all the time in the feeder outside the sitting room window in Sweden. Hattie loves owls and the first pygmy owl (bottom right) did not look little-girlish enough, so I did a second one and added some snowflakes and a softer background. Izzie (the one who decided they needed paintings) chose the kingfisher. My favourites are the Jenny Wren and the coaltits, but probably because the colours are fairly neutral. 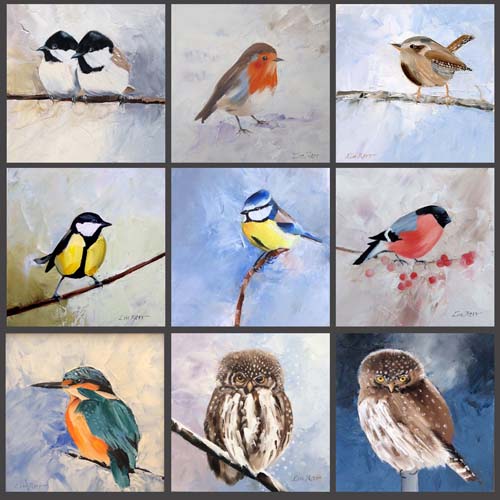 DECEMBER:
I sort-of started next year’s project – contemporary landscape painting and hope to do daily paintings – but will chat about my landscapes in another instalment.
Between January 23 and 1 December, I completed 80 little paintings.