In the last post I chatted about daily paintings in oils.

I was introduced to the concept of a drawing a day for a year by Clare Whittaker in 2001 and I was joined by Marianne Saddington from South Africa and she kept it up for the WHOLE YEAR (unlike me).

MARIANNE: Midyear in 2001, a friend in England, Clare Whittaker, sent me an article about a project done by six Australian artists. They did a 15-minute drawing a day for a year and then bound their drawings into books. Madly inspired, I emailed Clare to ask if she, and perhaps Lin Kerr, would join me in similar project. I asked another friend, Christine Coates to do it in Cape Town. 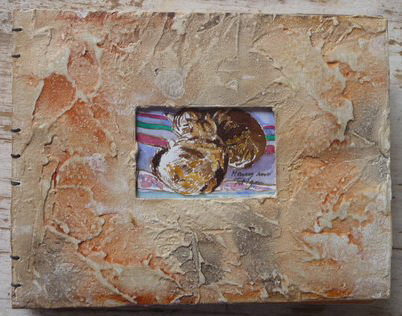 Marianne’s first journal with a polyfiller cover and an aperture showing a painting of two cats.
I was soon due to travel to UK and Ireland, so scratched around in my studio for papers to bind into a sketchbook, enough for about six months. Most of the pages were botched artworks or paste papers, which gave a textured surface to draw on, avoiding ‘blank page paralysis’. 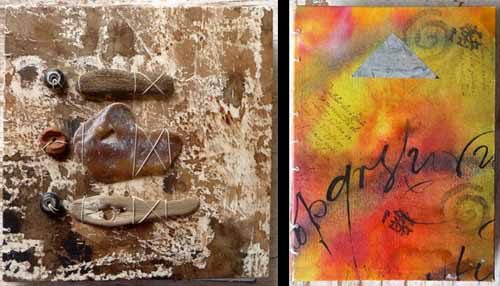 Two later journals
Once bound, I launched into my first drawing, a scribbly ballpoint drawing of a cup and saucer. After that I tried many different tools, drawing with right and left hand. I drew anything lying around my house whenever I had a few spare moments. I did slow contour drawings, fast drawings with a stick and ink, or brush and gouache –favourite tools over the years, as it turned out. 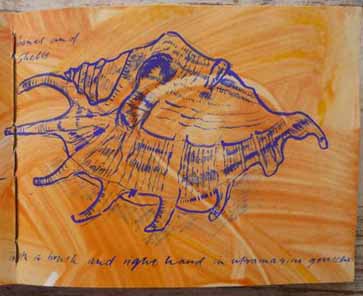 While travelling, I carried water-colour pencils, watercolour set, a small pot of gouache and a brush. 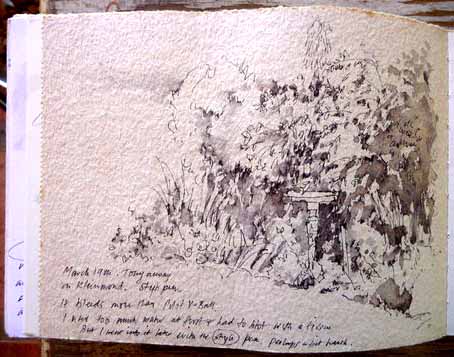 Drawing fast also scared off my perfectionist gremlins. While drawing and painting in Wicklow Ireland, I needed water, so my husband Tony found a plastic bottle in a dirt bin and dipped it into the harbour. 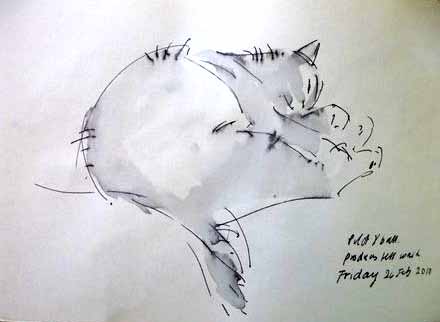 In September, four of us met in Lin Kerr’s house in London to share our drawings. It was stimulating to see the different artwork people produced. 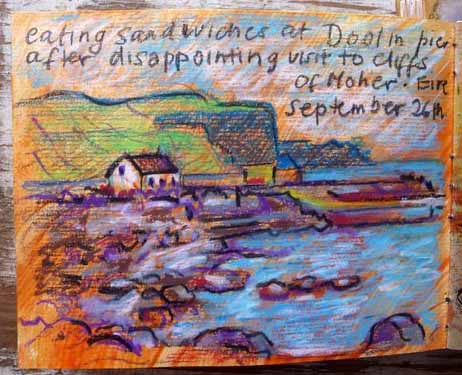 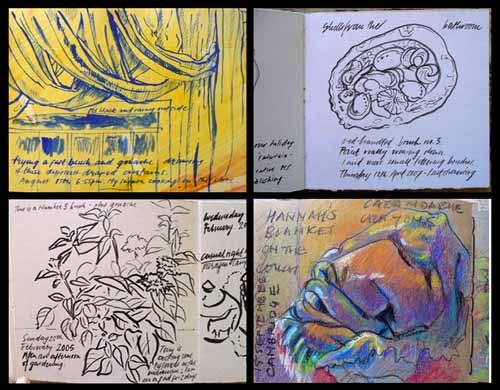 After that I continued drawing, filled the sketchbook and was sad to see the end of it. I bound another and have kept up with it on and off ever since. Paging through these old journals is always nostalgic, a pictorial diary of my life and styles of drawing. 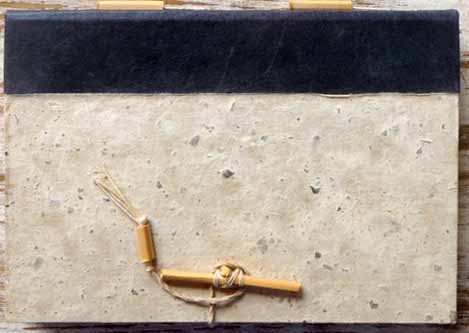 Another lovely journal made by Marianne

LIN: I only managed this daily drawing concept for three months which ended when my father passed away in South Africa. After travelling from the UK to his funeral I lost heart. But I bound the drawings into a book and kept the idea of a daily discipline for another day.

TESSA: My daughter Tessa is a graphic designer and she sets herself photography projects. I asked her to tell us about it:

The seasons are beautiful and yet fleeting so for one year I set out to capture the essence of each month and to record our daily journey to school. At the end of the year I selected my favourite photos and made a book which I printed as a limited edition of 20. 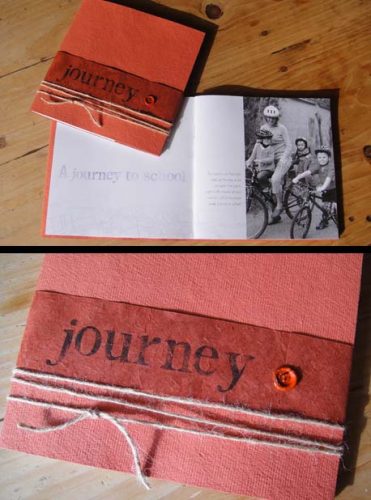 We do the same walk each day and yet it is so different as the year progresses. I took plenty of photos and each month made a focussed ‘observation walk’ where I wrote down the sights, the sounds, the smells and my emotions that made the month unique. 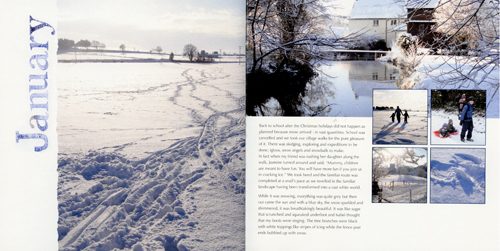 What a satisfying challenge this journal has been. Some months have been harder to record than others but it gives me much pleasure to view the changing seasons.

My Golden Hour Project: A few years later I set about a different 7-week project: I aimed to take photos in the early Summer morning which is known as the ‘ The Golden Hour’ due to the fabulous light.

The holidays were looming – the ‘big one’ – and with three children at home for seven weeks I wondered how I would have time to be creative. So I set myself a holiday project – to take a photo every day of my local environment. Well, I planned to do five days out of seven – I needed a few lie-ins. Because it would be hard to do it with family clinging to my skirts, I decided to take photos between 6:30 and 7:30 in the morning. 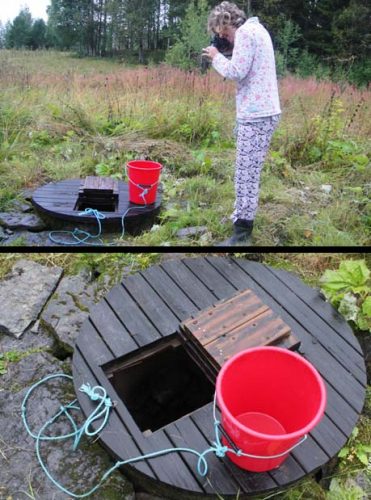 My 9 year old snapped me in my pyjamas taking a photo of the well in Sweden.
The theme – ‘Morning’s at Seven’ and having this parameter means I would be challenged to take photos from my doorstep… whether it is dewy flowers, snails, misty views or gifts from the cat… or the rest of the family at their ablutions. 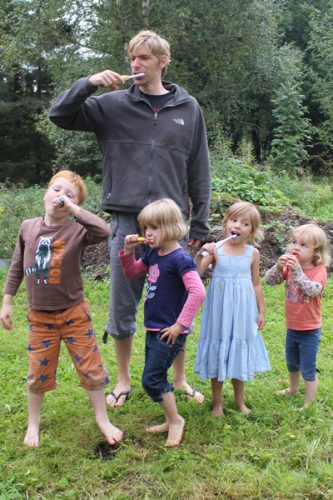 Summer House – Sweden. With no running water, my brother and the children have to brush their teeth at the water pump.
My doorstep varies during the holidays as we were camping, visiting the seaside and travelling to Sweden. I was excited by this challenge and the chance to become more familiar with my new camera. 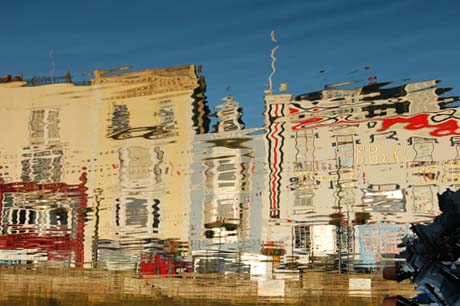 LIN: While on my ‘personal art-journey’ to rediscover my creative direction, I went to Australia and Singapore to visit family and I thought I’d try urban sketching, and do a drawing a day of my journey, buildings and people as a 2-month commitment. 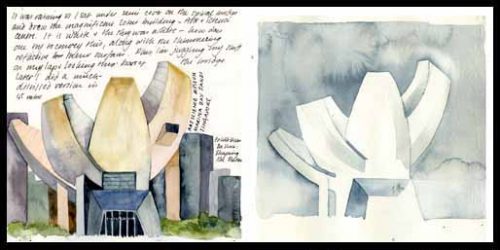 I learnt a lot about myself – e.g. that I don’t want to draw large buildings, unless they are very stylish like the Art-Science Museum in Singapore, above, (which I drew again the next day, to portray its’ awesome design in a better way)
I try to be process-not-product orientated, but I am hopelessly the latter.

I don’t work in bound books, but on folios of paper that I can bind later or discard if my drawings or paintings offend me. 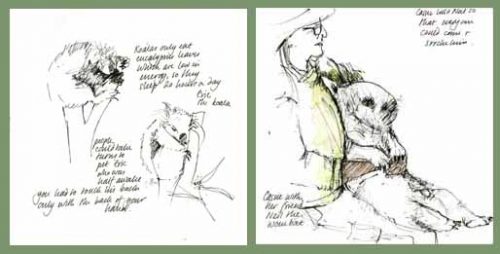 I discovered that drawing animals is similar to drawing humans and they can sit quite still. Neil the wombat was on the rangers’ lap for a queue of people to come and pat him. 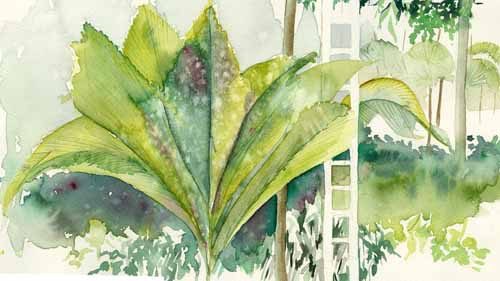 In the Singapore Botanical Gardens I was caught in a monsoon storm, and while sheltering I painted this scene. The rain came in sideways and you can see the spots where it splattered the drawing. A Malaysian woman in designer jeans sheltered with me and she calmly sat on the ground and wrapped a shawl around herself and waited. Her name was Ratree which means ‘Night Flower’ and she was happy to let me draw her with my ink filled Pentel brush pen. 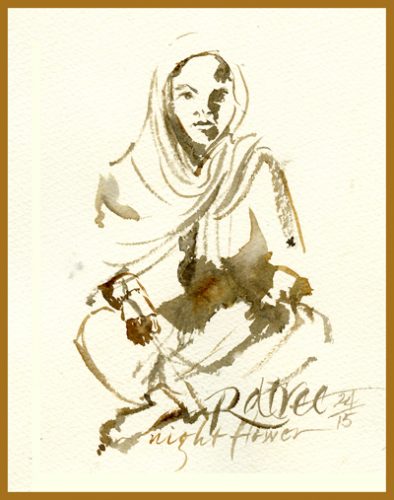 And it was extremely comfy lounging around the condo swimming pool at my son’s flat painting or having a swim!

I enjoyed the chance to experiment with different media and styles of drawing – from illustration to realism to stylisation. I even discovered that I can draw water (never having tried before!) It was such a lovely holiday project and gave each day a focus and looking back, each experience meant so much more to me when I look at the drawings. It is much more meaningful than 1000 digital photos to sort!

In the next post, Marianne, Tessa and I will give you our top tips on daily drawing, painting or photography.