I began painting in oils in January this year after a 40-year gap (as a graphic designer, calligrapher, watercolourist, printmaker, etc.) and I thought that doing a daily painting would be a good discipline. Now it is nearly October and I have painted 60 little 15cm x 15cm paintings (and sold a lot). This is alongside doing larger pieces as well.

I began with pears and garlic and my first attempt at a glass bottle – from my lovely blue bottle collection.

The idea of vessels is very appealing and I wondered if I could get sparkly reflections. I set up a little box with a desk light for cast shadows and inserted a vertical piece of board in the back for a vertical shadow. I am working from observation.

I soon discovered how much I enjoyed subtle shadows like those cast by the fold of fabric.

I was painting the white rose at a friend’s house when we heard the sad news that our mutual friend had just passed away about 10 minutes previously. I finished the rose and named it for Lois. 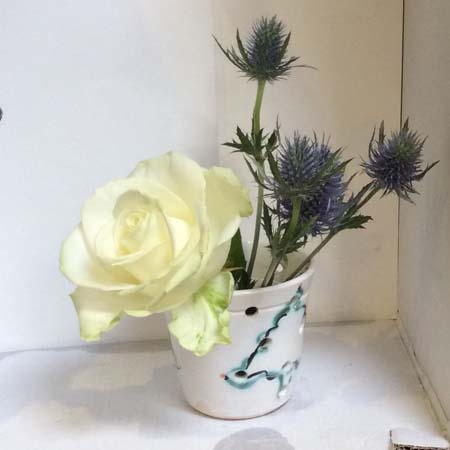 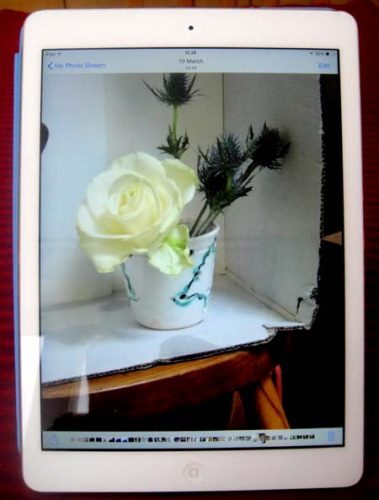 An ipad works very well as a viewfinder, because you can crop the image to a square (or whatever shape your canvas is) then find your starting point to fit it on the canvas comfortably. 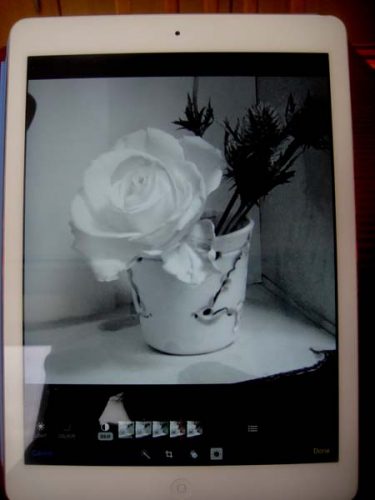 I could see that I needed to increase the tonal values on the rose, itself. But at this point, I usually abandon the i-pad and work from observation. 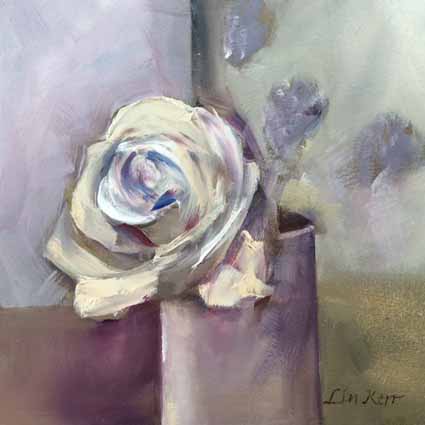 I think that the forget-me-nots were the most popular ever, proving the notion of the value of an emotional connection with a subject.  I did two forget-me-not paintings, but seem to have mislaid one of the images!

During April I was invited to paint in the UCARE charity tent and the theme was tulips. I didn’t know where to start because I quickly discovered that a single tulip in a vase would look pathetic in a 15cm x 15cm square. Also by July tulips would be out of season. Another problem is that so many tulips are pink or white and this is limiting, because people don’t buy pink paintings much and white tulips don’t have many shadows, unless they are parrot tulips. I experimented by painting from some mediocre photos I had taken and then some excellent ones by my brother, Des (top left and bottom right). I wanted to add some drama, so had to choose between a patterned background – metallic – or a black background.

Doing so many paintings with shadows, glass and reflections, inspired me to paint more of my blue bottle collection. I also tried tricky textures, like the dandelion and cow-parsley.  The mustard salver was painted as a demonstration at Ardington School of Art and Craft, where I am now teaching oils. The easel is a fold-up metal field easel – very useful for demos. 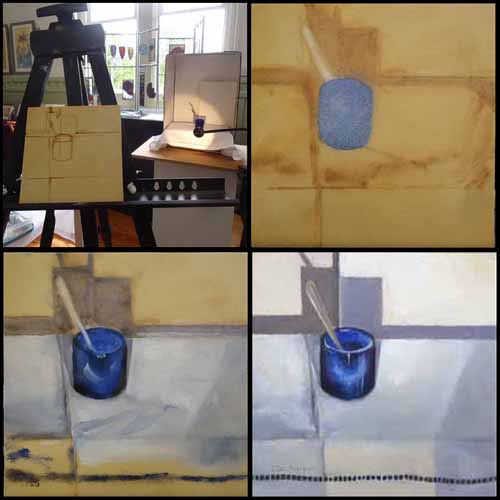 By now June was approaching fast, so other than an onion commission, I had to get on with the tulip paintings. I did two very large parrot tulips paintings, and I had lots of excellent photos from Des who is a professional photographer (and mining engineer).

The tulips were a challenge and I was pleased with them, but copying photos doesn’t have the same emotional involvement as working from life and I also felt that the colours were not really my first palette choice. It was good to get back to my usual interest in reflections and everyday objects. But first a rest, a holiday in France and some watercolour studies of landscape and clouds for some large artworks

I have now begun to work on canvas instead of wooden panels. Details are less sharp (which is probably a good thing). and I love the way the paint rests on the surface of the canvas. This is my summer jug and berry series for next year’s Artweeks Open Studios. I think that if I have about 6 – 10 small paintings complete well ahead of time it will take the pressure off me and I can do some larger work. Also people prefer buying seasonal paintings!

When I began these daily paintings I visualised myself doing very free brushstrokes with lost of impasto, but somehow the small canvas, my interest in reflections and perhaps lack of boldness has created something quite different. Perhaps this is my style and time will tell. (BUT, I hope that when I do large cloud studies I’ll go wild with the palette knife and use loads of thick yummy paint!)