« Previous: Artweeks at Ardington
Next: All my daily paintings – Private View »

Lesson 3 is really about practising the new tools. I also wanted to show Isabel how versatile artwork can be. 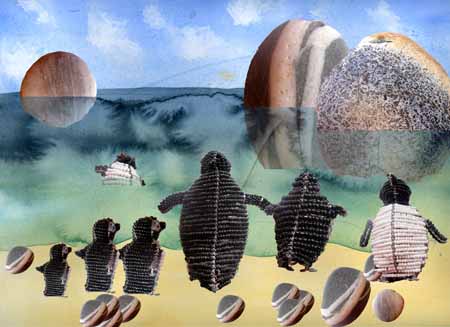 Here is last week’s project. This week we took a picture she had done of Table Mountain for something else and scanned it, then expanded the beach and made the sea narrower. 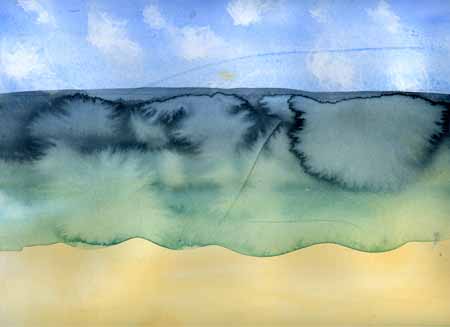 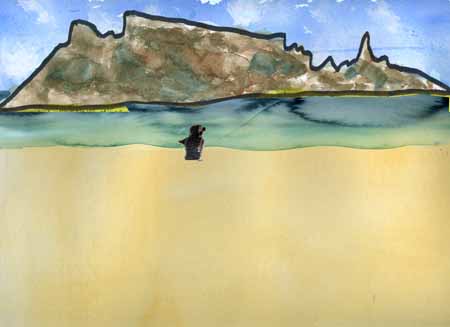 Populating the beach with penguins is good practise and helps her learn by repetition.  We decided to do the penguins running to jump into the sea. Read the true story I told her below* and you’ll see why the penguins are running.  Isabel understands layers very well and had loads of fun resizing the penguins and made the one very little and fat then gave it to this lone penguin for its baby. 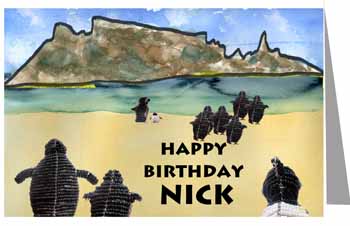 It was Isabel’s idea to make a card for her brother’s birthday, so we finished it in Indesign. I didn’t want to muddle her with Indesign, and she needed a rest, so she watched me import the image and then she typed the words in. We printed the picture on photo paper and glued it onto some folded card.

The True story: In 1994, when my children were university students in Cape Town there was a very bad oil spill which had washed up onto the shores of Robben Island (where Pres. Mandela was incarcerated) and was life-threatening for the jackass penguins. 10,000 penguins were rescued and the students were asked to help wash penguins. Loads and loads of students volunteered and it was the in-thing to boast about their penguin scars from getting scratched.  Within a few days many penguins were ready to be released and they were airlifted to be released into the clean sea 500 miles away at Port Elizabeth.  Follow this link to read the newspaper reports. 5,000 penguins survived.

There was a photo in the Cape Town newspaper of thousands of penguins running into the sea in PE in great excitement and it only took a couple of weeks (if I remember correctly) before they were all back at Robben island.