This pomegranate was a commission and quite a challenge at that! My friend Heleen de Haas wanted something to go with the painting of plums which she had chosen and said that because she grows pomegranates on her farm, this would be ideal. And it is now hanging in Prince Albert in Die Klein Karoo in South Africa. A well travelled pomegranate! 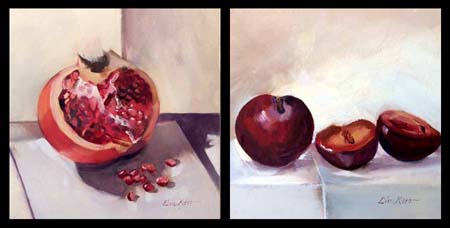 Heleen and I became friends in 1984, when I had just begun calligraphy and I had lived in Cape Town for 6 months. We travelled to Johannesburg together to attend a workshop by an American calligrapher, Denys Taipale (who later married Stan Knight, author of Historical Alphabets) We only really got to know one another on the plane trip, and still better on the way home, when we missed the flight because the plane was delayed then we got caught up sorting out and washing our nibs in the cloakroom. We had an uncomfortable night sleeping on the concourse seats and caught a 5.00am flight back. Anything for calligraphy!

Our young children were at home with our husbands and we were so excited and dizzy about calligraphy. On the workshop, we had a learning curve second to none, having arrived with confidence and enthusiasm and leaving in awe of how much we still had to learn. This was thirty two years ago and over the years, our friendship and lettering skills continued to flourish! I now live in Oxfordshire and Heleen and her husband have moved to a farm with a B&B called Die Letterhuis with Heleen’s wonderful lettering everywhere. You can view some more photos by clicking here. Die Letterhuis means House of Letters.