« Previous: The Village Shop
Next: Correcting spelling in calligraphy with a patch! » 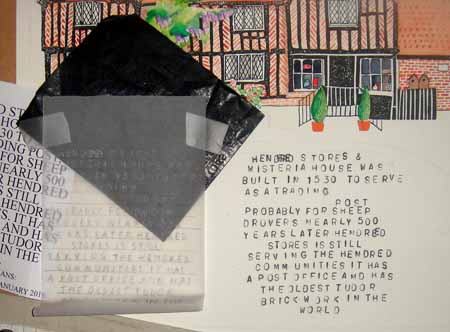 I chose this sort of lettering style because the hand punched metal letters goes well with the irregular Tudor structure. First, I tried blind embossing the letters with a view to painting over them so that the flooding of the watercolours will go into the indentations and make them show up. This works well if you can do the embossing with a softer surface under the paper, as the embossed letters punch deeper. But this paper is stretched on board, so the indent was too shallow to make an impression. (The grass will be painted green)

Plan B was to hammer the letters in using carbon paper. The strong black in the drawing can cope with this. By putting tracing paper on top, I had the guidelines which I pencilled and I could just see the indent to position the next letter. I began punching. Of course you can’t see a thing with the black carbon paper and I messed up on the FIRST word! Then a bit later, ‘POST’ landed on the wrong line. I finally worked out that if I write the letters out in approximately the right spacing on the tracing paper the letters had a better chance of survival. Oops, did the E twice in Hendred!

So naive industrial lettering aside, I have some serious fixing to do. If you never see this piece again, you’ll know why. But I think I can save it, as I have a cunning plan. I’ll keep you in the loop. 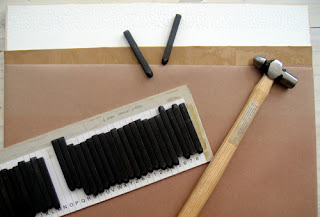