Each year I get a little better at managing the IKEA gingerbread house kit(s). This year each grandchild will each ice their own. I thought I’d be super-organised and do the windows well in advance with Nick, the oldest, and have beautiful amber transluscent molten sugar windows. But by the time we unwrapped the pieces a month later from the baking parchment to start the next step the sugar had re-melted and gone gooey. Never mind, we just stuck paper over the backs. Izzy’s wall had a crack which we stuck a gingerbread heart over.

My grandchildren arrived for the day and we started by icing the individual pieces. I learnt last year that it’s best to ice everything in advance with royal icing and then when it is hard, to glue the pieces together. We iced and glued with Royal icing (see recipe below) and it’s hard to beat for stickability. The finish may be a little rustic, but I’m think melted sugar may go soggy in a warm or humid temperature like the windows. Anyway the only people who need to be impressed and amazed are the children themselves. 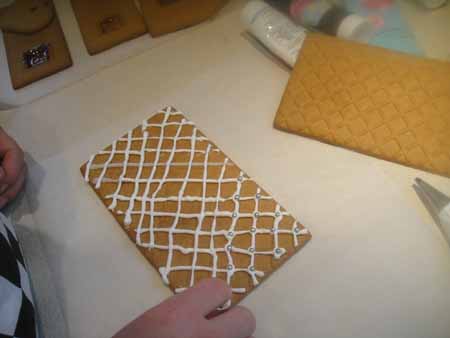 This is the first time Isabel (9) has iced with Royal icing and an icing nozzle. The kit is nicely marked with a roof pattern.
In previous years I iced the house and the children just stuck M&M’s on. This year they will each do their own. They have a packet of M&M’s and silver balls and its up to them whether these get eaten or used as decoration. 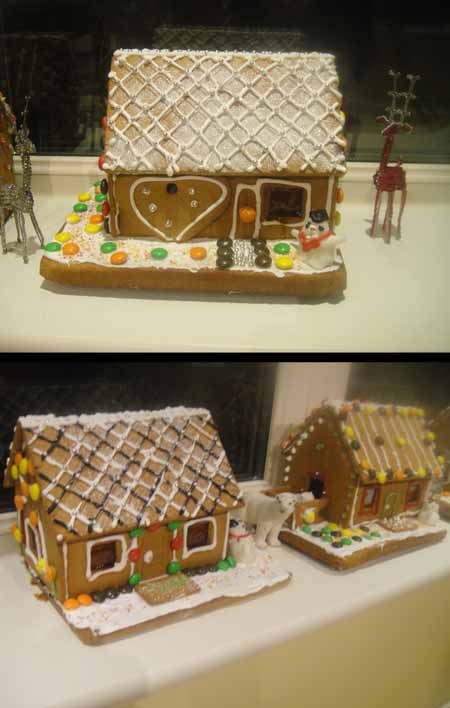 If you have read enough and have lots to do, I’ll take this moment to wish you a very blessed lovely Christmas with people you love. Thank you for reading my blog and I’ll be back in 2016!

If you want the saga and the details, read on…
Royal icing gets really hard in just a few hours and is easy to handle. Downside is that its is very bright so bad icing shows. On the other hand, these are naive gingerbread houses and quite charming, so crooked icing is rather cool. The children did the decoration but I had to do the glueing as they went home and the glueing had to be done in dribs and drabs over 24 hours.

Beat the egg white till its frothy then add the icing sugar gradually until its very thick. Add a little more if it seems too sloppy.
Spoon it into a ploythene triangular icing bag with an icing nozzle in it. You can improvise with little zip-loc bags. (I’ll skip all the details of how to do the icing as there are many excellent you-tubes) But if the icing gets too soft from the hot little hands pop the bag into the fridge for a while.

Last year I tried to prop the house up with various weights and also thought I should do all four walls to keep it standing. The back fell off onto the floor and smashed. Below is last years house (not yet decorated  – now I know better!) 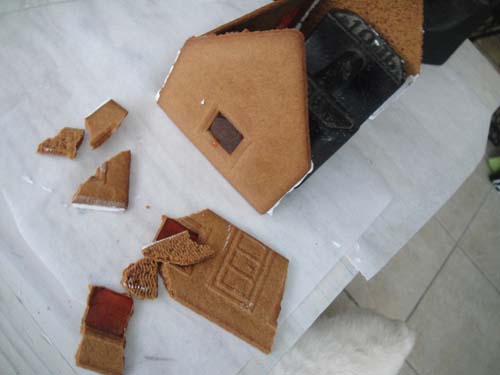 This year I tried using a shoe box to keep them upright and only glued two walls at a time. I could fit all four walls in the shoebox, using opposite corners of the box. 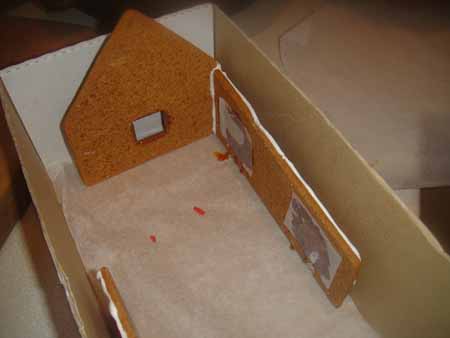 You can see how we had to stick paper over the melted windows. One window fell out completely.

After a few hours, I glued the two L-shaped pieces to make the four walls and left these to dry. They didn’t need anything to lean on to keep them upright. 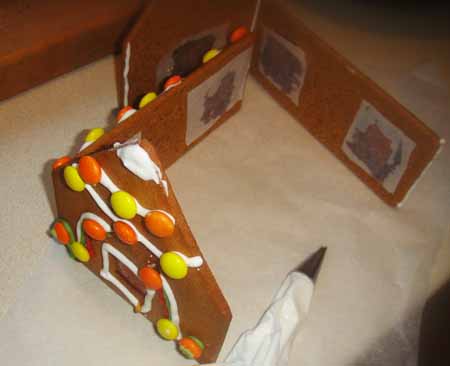 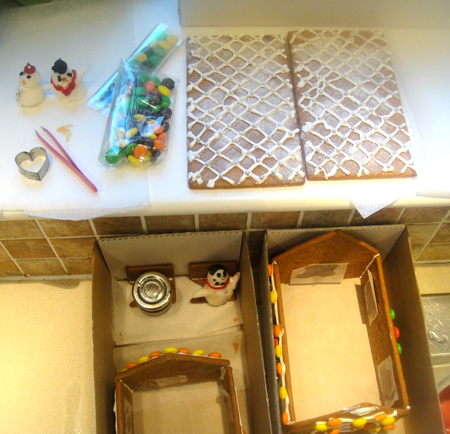 They made the little snowmen from some left over frosting from the Christmas cake. The IKEA kit also comes with a chimney but this couldn’t fit on the decorated roofs so we left it off. 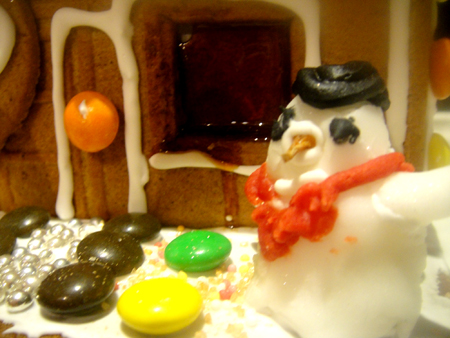 Izzy’s little snowman looks like something from ‘Nailed it’. If you want to fall over laughing google ‘Nailed it’ and see all the flops where people have tried to make something that looks like the recipe picture! And do note the melting window.
Anyway, the roofs. Last year the roofs kept slipping, so this year, I planned in advance. When all four walls were really firmly glued, I built up some bricks to stop the sliding and stuck the roofs on. 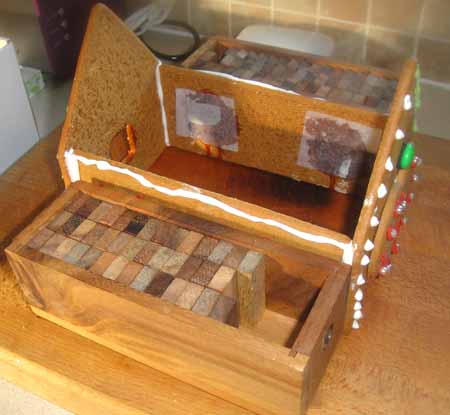 Above: Hatties’ house is already for the roof. I still have to ice the top of the walls and roofline. 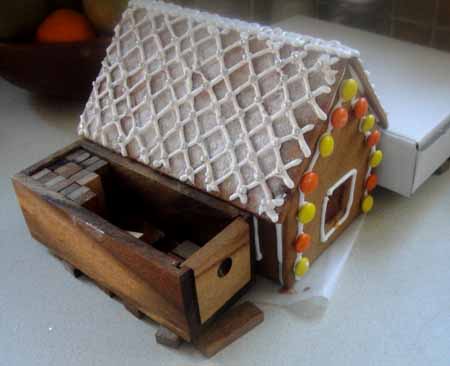 Izzy’s house has it’s roof and is drying. Once the three houses are roofed, I’ll pop over to their home to let them ice the ‘gardens’ for the houses. You need another batch of Royal icing for a large base or two – three small ones. You don’t get gardens or bases with the kits, but we madeour own. 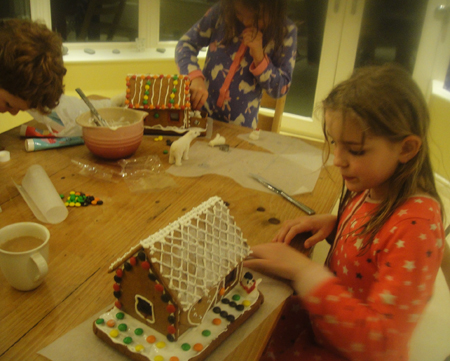 The recipe is for Dutch breakfast cake called Taai-Taai which means ‘tough-tough’ and when the children were young, we always made it for travelling, so that the children could eat it in the car , sliced and buttered as it isn’t crumbly.

Usually made in a loaf tin, but for the gingerbread house use a baking tray 32cm x 22cm or two small trays, each 25cm x 18cm:
3 cups plain flour
500g syrup
(When weighing, heat a tablespoon in boiling water so that the syrup glides off it into the bowl)
1 cup luke warm milk
1 tsp bicarbonate of soda
1 tsp ground ginger
1 tsp mixed spice

Sift dry ingredients. Warm milk and syrup till hot but not boiling. Add gradually to the dry ingredients while whisking. pour into a greased and floured baking tin (or one lined with baking parchment.) Cook at 180 degrees till brown and crisp outside.
(Sorry I don’t I know how long this takes!) 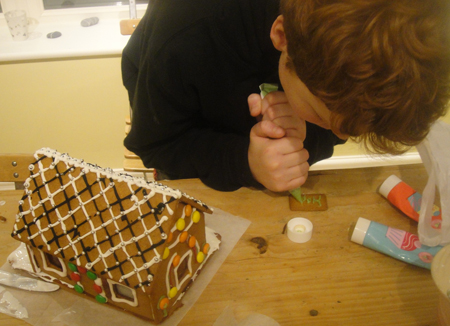 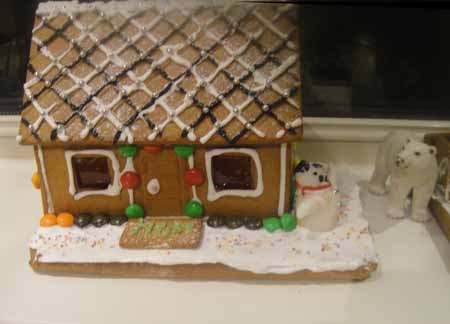 Have a Wonderful Christmas and a splendid New Year.