I was asked to do a non-threatening lighthearted inter-active workshop at the Betjeman festival in Wantage. It needed to reflect something of Betjeman. Megan suggested doing ‘In a Bath Teashop’ with my cut-out cups and saucers.

The Bay Leaf Cafe in Wantage hosted us and we made greetings cards, followed by a delicious cream tea with freshly baked scones served on vintage china. I took photos but but they were rather fizzy, so you’ll just have to see my sample cards!

Here was my design plan: 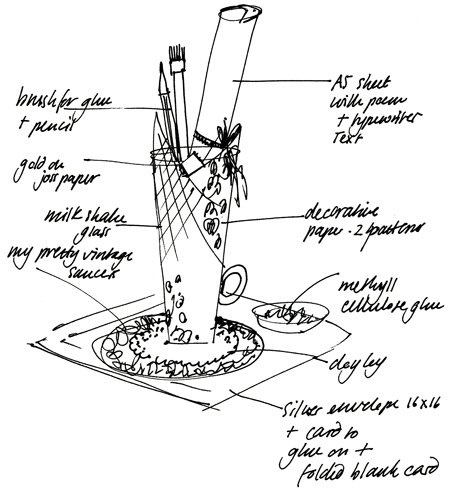 Pepin papers makes books of 12 sheets of pretty giftwrap and we had Art Nouveau and Tile designs from Portugal. (from Amazon) I discovered, when combining patterns that they needed a huge amount of contrast to work together. Each glass had two A5-ish pieces put into it, which made the glasses and ‘place-settings’ look very pretty. The guests were told they could swop their papers with some I put on the sideboard if they preferred other designs. They also had some gold and silver metallic joss papers (decoration, sugar cubes etc.), a doyley each and ablank card with a silver envelope.

When everyone arrived, they were seated at two large tables (6-8 per table) and two actors sat at the window at a small table laid for tea and recited the poem. Then I demonstrated and made a card from the beginning to the end. This was so that anyone who were anxious about where to start had several ideas for starting points and could see how easy it could be.

Lots of fun followed by a scrumptious tea!