I spoke about moving the goalposts in writing my little book ABC Uncials for 10 year olds and upwards.
Well I am now enetering the Realm of the Last inch…

Now listen to the rule of the last inch. The realm of the last inch. The job is almost finished, the goal almost attained, everything possible seems to have been achieved, every difficulty overcome — and yet the quality is just not there. The work needs more finish, perhaps further research. In that moment of weariness and self-satisfaction, the temptation is greatest to give up, not to strive for the peak of quality. That’s the realm of the last inch — here, the work is very, very complex, but it’s also particularly valuable because it’s done with the most perfect means. The rule of the last inch is simply this — not to leave it undone. And not to put it off — because otherwise your mind loses touch with that realm. And not to mind how much time you spend on it, because the aim is not to finish the job quickly, but to reach perfection.
Alexander Solzhenitsyn

It is so true.
I thought my little book was pretty well complete and asked my daughter to proof it.

She felt the handwriting font was wrong in the main text, except on the cover. (only a few hours to re-do that one) but then…don’t you just hate it when people pick up on stuff that you thought needed changing but hoped they would think it didn’t – she said the letters were quite big and this made the page crowded. Point taken!

This was because I had decided to limit myself to a balsa pen 9mm for the main lettering, then add in a Speedball C-0 5mm nib and Brause #3 nib for smaller letters. I tried cutting a narrower balsa pen and yes, it worked. So I resized and repositioned all the letters. Just doing this took several hours because all the little arrows and to be thickened up and re-sized and  I could fit more than three letters on each page. So I ended up with an extra page. So now I had to do an extra piece of calligraphy. 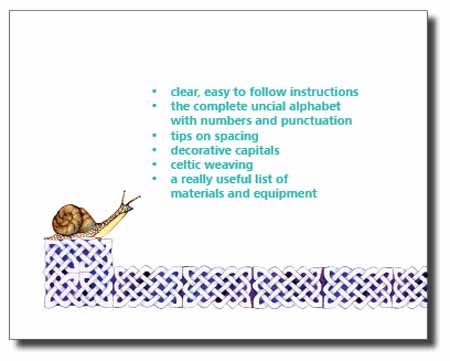 Many many years ago I had started a book for children and the publishers weren’t interested – this was before digital self-publishing began. But I had been given verbal permission by Gus Ferguson so use a few lines from Snail Morning. So I wrote it out for the final piece, but suddenly realised that verbal permission twenty years ago does not count! And this book has to be printed NEXT WEEK! Bev (who often comments) helped me locate Gus and I emailed him and guess what, three days later I had a lovely gracious “Yes of course you may use the poem”. Hey-ho.

Gus is a wonderful South African poet and cartoonist, and a very generous man, as you now know”. He used to live quite near me in Cape Town and has written many hilarious poems about snails. I liked the one about the snail stripper at a nightclub called the Mollusc Slipper Club ”And slips from underneath her shell: a hyper naked Jezebel” when the cynic said “She’s nothing but a common slug” Well not quite suitable for a child’s book on Uncials, so I did this piece from O Snaily’s Birthday:

And the book is still almost finished – again!