« Previous: Pookie and Piku
Next: Creatvity »

I’m so into ‘book-mode’ at the moment! And now I feel a new book coming on – Calligraphy for 10-year-olds. Watch this space!

This is probably because I am taking part in two book festivals. Megan and I are exhibiting at Wantage in mid-October and the exhibition is to co-incide with the Literary Festival titled ‘Wantage (not just) Betjeman Festival’ The other one is the Oxford Fine Press Book festival on 31st october and 1st November. More about this later.

Rope of Words will be shown with all the illustrations and I will also be launching Dance, and will have all 7 originals framed and on the walls. Of course its a fantastic opportunity to show my set of child-artist books as well. 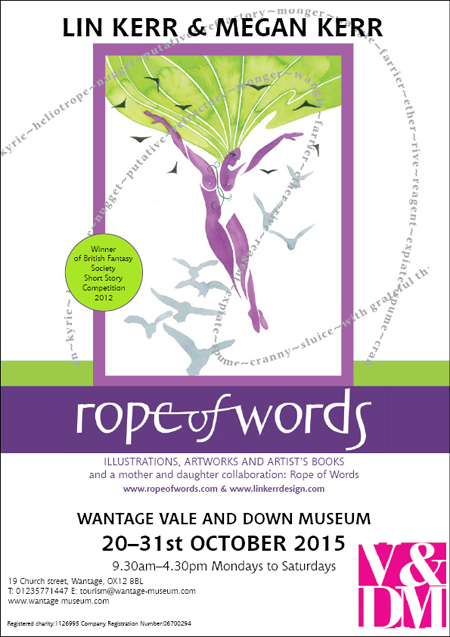 LLUSTRATIONS, ARTWORKS AND ARTIST’S BOOKS
and a mother and daughter collaboration: Rope of Words
www.ropeofwords.com & www.linkerrdesign.com

We are also each giving a workshop- see tomorrow’s blog for this.

Artist Lin Kerr and her daughter, writer Megan Kerr,  discuss how their thoughts dovetailed and collided when they created a book together. When Megan won the British Fantasy Society’s Short Story Competition with  Rope of Words, mother and daughter longed to combine their creative skills and make a beautiful illustrated book. A legacy  from Lin’s mother enabled the Kerr’s to turn their dream into a reality. Lin set to work on creating 14 illustrations in watercolour for Megan’s magical realism tale of a woman and her lover who collected words.

Megan will narrate bits of the story, richly illustrated by slides, giving the background to the way she created it, and Lin will chat about how she tackled the stylisation of a universal woman who has lost her words and her lover. The original illustrations and copies of the book can be seen in an exhibition which will be staged at The Vale & Downland Museum during the Festival Week.

Megan Kerr is a short-story writer, novelist, and poet, with a special love of magical realism, literary slipstream, and formal poetry. She has a Masters from Brasenose College, is a member of Writers in Oxford and the British Fantasy Society, and runs The Writers’ Greenhouse, creating writing courses and writers’ games and activities. She grew up in Cape Town, South Africa, but fell in love with Oxford in 1995 and has lived there since 2002.

Lin Kerr is a fine artist, a lettering artist and an illustrator. She is a Fellow of CLAS (Calligraphy and Lettering Society) and a Full Member of Letter Exchange, a society for professional lettering artists. Lin teaches, exhibits, and produces lettering-based artworks and the occasional large-scale botanical painting. She is from South Africa and has lived and worked in the UK since 1998.