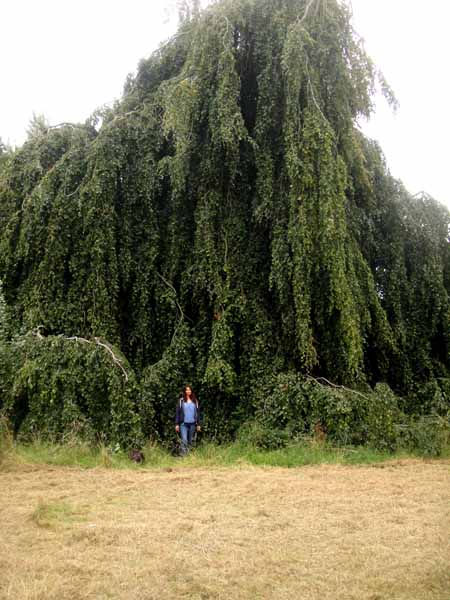 Last week I had such a lovely day out. I met a friend in Oxford and we went off to University Parks to draw trees. I wanted to introduce her to the very well-known Weeping Beech Tree (Fagus Sylvatica Pendula). It’s impossible to draw though, because however you draw it, it would just look like a mountain of leaves! To see more images of weeping beeches, view here!

The she spotted an opening and we crept under the weeping overhanging branches that were thickly enclosing the tree trunk. Suddenly it was quiet and we were in a large round nearly solid cave of  dead leaves with the trunk in the centre, within a secret bower of hanging branches. She suggested we draw it so we set ourselves a 20 minute slot and drew more or less what we could see without moving our heads too much! I did a countour drawing really quickly without lifting my pen too much and then added dappled colour.

I added the pen-tone on the branches later at home.
What what a wonderful way to spend some time with a friend!