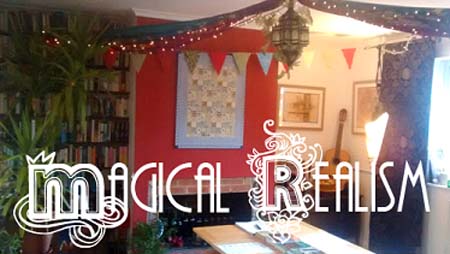 At the end of July I blogged about taking a break and now, since it is still the summer holidays, I’ll continue this theme. How about going on a workshop outside of your usual discipline with no particular goal in mind – other than to refresh your creativity.

I did just that; accidentally, rather than planned. I went to a writer’s workshop on Magical Realism, run by my daughter Megan. Apart from being ‘the person who feels totally out of place, inexperienced and a rookie’ (this is really good for me as a teacher!) I also kept mentally translating the exercises into stuff I could do in art. It was such a wonderful day which I know will feed into the creative process somewhere. 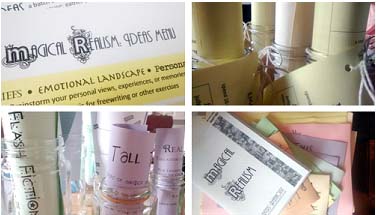 As a teacher it was a sight to behold. Megan had gone the Full Monty, decorating her writing room (usually the sitting room) to fit the theme – fairy lights wrapped in silk, still-life vignettes all over, decorative notes with MANY fonts (!) and even all the notes for us were creative and magical, presented in rolls tied with string in jars.

So I have asked Megan if I could nick her blog, and here is the first part, with some more on Friday:

As part of the Summer of Writing I created a magical realism workshop which ran last Saturday. Among magical realism’s various other features is “abundance” or “plenitude”: basically, it soaks ideas up like a sponge. Anything you want to throw at it, it just absorbs, gleefully. And the kind of fanciful, unexpected, incongruous ideas it likes best aren’t the kind that come from frowning at a piece of paper and thinking very hard – they come from the bouncy bit of your brain leapfrogging around. (That’s the kind of thinking we traditionally call “right brain”, even though it’s actually the left brain doing it.) It’s a kind of careless, carefree, giggling, half-cut, freedom of ideas. So how do you conjure up reams of ideas, ripe for the picking? And how was I going to create that space within the workshop? How do you create an abundance of unexpected ideas?

At the start of the workshop, we looked through a range of magical realist books, for two reasons. (I popped a summary in the front of each book, and marked some key excerpts, so students could browse through them.) The first, more obvious reason was to explore what magical realism is, and start identifying its main features. The second reason, though, was to give students permission. That sudden realisation of “Oh! You’re allowed to do that!” All the crazy, surprising, tongue-in-cheek things that happen in magical realism (and of course the excerpts I chose honed in on those) turn into permission.

Often, the problem isn’t finding ideas, but allowing ideas: each time they pop up, like moles from the ground, not bopping them on the head the moment they appear. Lots of creative strategies that talk about the unconscious mind, avoiding the internal censor, and so on, are about exactly this: not bopping ideas on the head, giving yourself permission. Freewriting, free association, writing when you’re groggy, even the infamous “creative tipple“, are all ways to duck our usual idea-bopping.

The most valuable writing permission I ever got was when I was 17, at the Grahamstown Festival in South Africa (think Edinburgh festival). At one of the schools events, Pieter Dirk-Uys, a famously anti-establishment comedian and activist, told us that people always asked him, “How do you get away with it?”
“There’s no getting away with it,” he said. And then the words that have stayed with me forever: “You can do anything with the alphabet. You – can – do – anything – with the alphabet.”

You can do anything with the alphabet. Calligraphers, get that sentence and put it into neon signs!