« Previous: All about making greetings cards
Next: Calligraphic dancers »

Would you paint a picture to match the sofa?

When we were students we were all quite snobbish about self-expression, finding our personal style and being super-original. In those days we never paid the bills either! (Dad paid them) 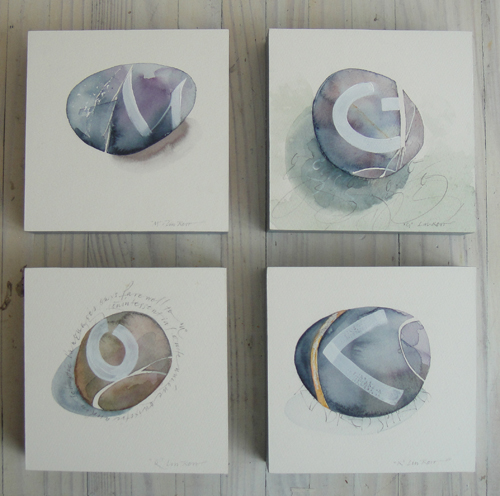 I think I still have a LOT of no-no’s from back then. I had a weird conversation with a friend who said “I am prepared to try any sort of painting as long as…” (and here I mentally said, it does not sacrifice my artistic integrity) but she said “as long as I think it is financially viable” Another lesson!

The same friend told me that the in-colour this year is muted greys and it would be good to paint to complement this. This makes me feel that I live in the dark ages, still not even thinking of market trends.

When I painted the pebble paintings I thought it was a natural. zen-like, personal expression; and original (in that I have added letters in the same way I did to the original pebbles). I also thought it was very saleable and important that it is archival. Each pebble is unique, has words added, and is mounted on blocks painted and sanded and properly finished with Annie Sloan paint. They are sealed to withstand bathroom damp. I painted about 20 of these. 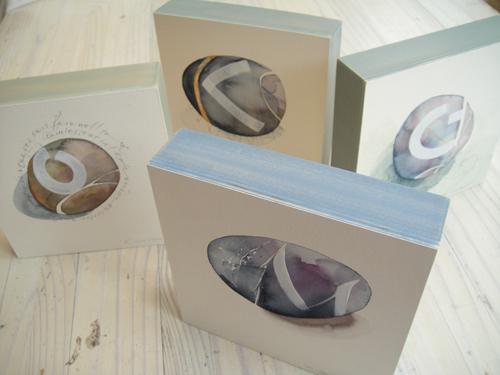 I had them at Art in Action in August 2014 and sold one. Someones said they were overpriced as they are bathroom art (as opposed to sitting room art). There is a lesson in that which I have taken on board. Another person wanted the edges to all match. I loved the variation and thought mix ‘n match is good.

I offered them to a gallery in Burford  in November 2014, but they said that as it was winter they should be shown during summer!

Later I had them at Artweeks in May 2015 and sold four (one to my granddaughter Isabel, with a commission from Harriet (6) to do an H). I balked at selling paintings to my own granddaughters but their Mum said “They have money burning in their pockets and I’d rather they bought your paintings than more fluffy toys”. 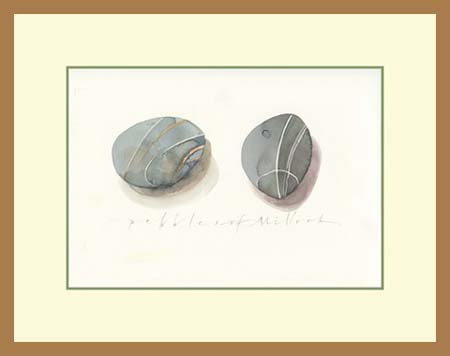 Now they are in a proper gallery, this Summer 2015 with a display of the real pebbles and they have been selling steadily.
So this is what I learnt:

I still have masses to learn – can anyone offer any shortcuts or inside information?

And here’s a thing! Someone told me about a botanical artist who said that when there was one painting that she could not shift, instead of marking it down, she reframed it in a much fancier frame, and hung it in the centre of her display. It always went quite quickly!

But I am pleased to see that my calligraphic dance figures are very popular. I’m just not sure how they fit into what I have learnt!