« Previous: The challenge of getting a commission
Next: Calligraphy at Art in Action 2015 »

I was recently invited to do a commission of a map for a Magic, Mythical and Mystery Quest in Oxford. The client said that there would be 17 clues to be written in calligraphy, a map and possibly some images and he presented his budget limits. He wanted an olde-worldy-feel. What a fabulous fun project!
But how could we  make it work without losing the plot and going over-budget?
Before you read on, try to imagine how you would approach this. The idea is that they will run tours in Oxford for children who will each be given a map in the form of a scroll. They need to visit the places and answer the questions or take photos.

The map would have been quicker if done completely by hand as it takes a long time to do street names at all angles and on curves digitally in Illustrator, to look good. However, it is much more legible and can be corrected / changed more easily. There were also three extra bits outside ‘the magic circle’

There was a huge amount of information to fit onto an A3 sheet of paper.

As an artist it’s easy and sometimes unavoidable to get carried away and do something to the nth degree of perfection, and I’m one of those; but I try to forsee and plan some shortcuts. The client raised the budget and we cut down some of the work (like wriitng out the clues in calligraphy). Actually it made sense to do as much as possible digitally because as the tour develops, changes are easy to make, as long as the map still looked old and special and m y s t e r i o u s!

Look at  what happened to my timing:

This excludes time spent emailing the client – we excahnged 42 emails and many had attachments of images or instructions.

I decided to do all the bit separately and assemble them in photoshop.
I even did the letters of the title separately so that I could see if they looked better on a curved banner or straight. We wanted the heading to look magical so I looked at a variety of fonts and then incorporated some of the ideas into a sort-of-Uncials style, in water colour so that it would be shaded. The client was fantastic and accommodating – he was happy to rearrange the title from Magic, Mystery and Myth to Magic Myth and Mystery to for the sake of the layout and scale.

We also developed a real sense of trust and good communication by email. 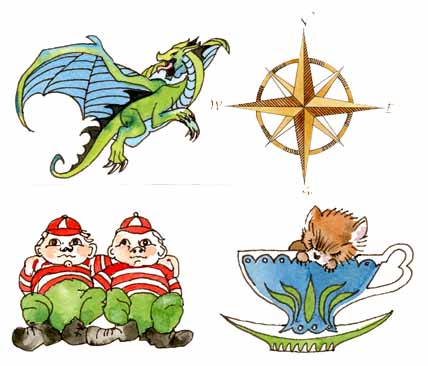 Here are some of the bits and pieces. The drawings had to be original so I looked at the internet and adapted and copied. I was really careful with the Harry Potter one, copying a Snowy Owl and using Gothic on the letter it was delivering and not the original logo. I used a photo for the telephone box and designed the compass from a series of drawings. Tweedledum and Tweedledee are copied from a photo of the statues. I designed the little doormouse years ago for a card and changed the colours. Assembling the parts to all fit in can take a very long time, but it means you can shift and play to get a well balanced design.

We wanted to have icons rather than too many instructions and worked out a little key:

This was a really cool project and fun too. I’ll show the map on Friday.