« Previous: The Painterly Sketch
Next: Drawing the Village Church – Plein-air » 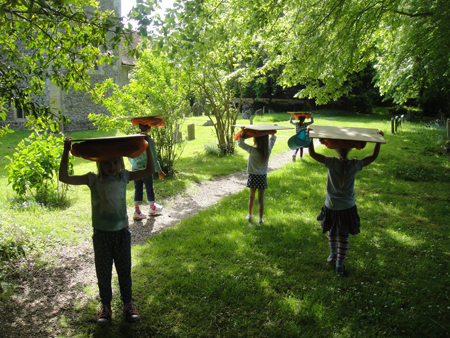 We started this mammoth ‘collage’ project in February – with my two granddaughters (9yrs & 6yrs) and three other girls (9, 7 & 7 yrs). The idea was to create some monoprints – view the post here; then do some rubbings of gravestones and inscriptions. The girls would paint a watercolour background, draw the church in a broad waterproof felt-tip pen (Sharpie) and glue their monoprints and rubbings onto it.

Here they are, four months later,  in June, carrying their cushions to sit on (suitably wrapped in Sainsbury bags) and drawings boards with stretched paper and watercolour backgrounds. They are walking through the churchyard to the viewpoint on the other side.  But back in February…

while it was still freezing, we went to the church to do some inscription rubbings.

I had planned for them to collage the grass in monoprints and the church in rubbed inscriptions. In the end this didn’t quite work out as planned, but we certainly had fun collecting the inscriptions. 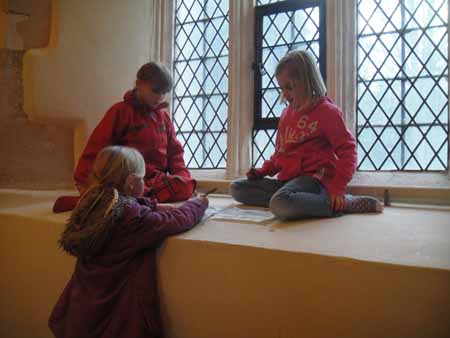 Here Isabel, and Elizabeth have climbed onto the window sill to get one of the nice brass inscriptions. Rose is standing a a bench.

So, fast forward to last Wednesday, when on a bright and sunny half term morning, we began the drawing at last. 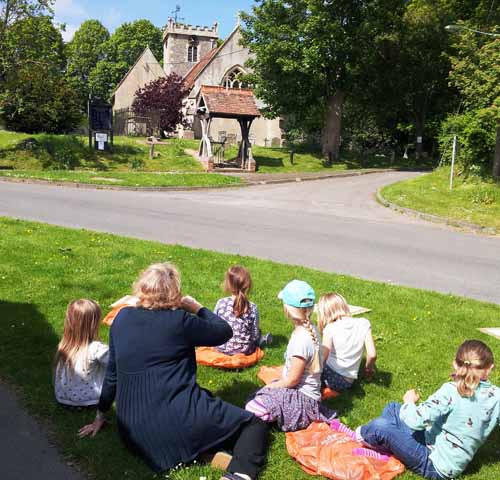 We started with a team talk. Having established last week that the sky touches the ground even though it seems to float above us, we now named all the parts of the church: The lych gate, the tower, clock, arched window with striped slats etc. This helps children draw from observation instead of slipping into generalities based on what they ‘know’ instead of what they ‘see’.