« Previous: Drawing the village church
Next: Church Paintings on Exhibition »

Plein-air drawing and painting is the in-thing. When you draw from a photograph it is trasnposing a little picture – but when you draw from life you breathe the image, you touch it and you often convey the sense of it. 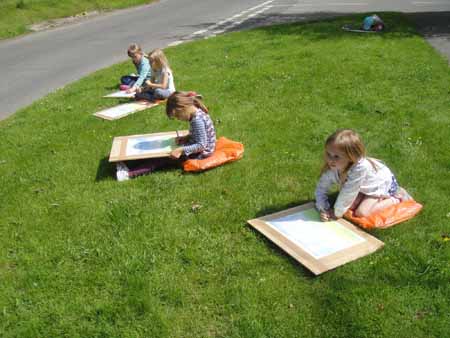 So the child artists began with looking – we made two trips to the church before the drawing session. One to look at it through viewfinders to decide on “portrait” or “landcape” and one to do rubbings of inscriptions. I believe this puts the image of the church into their beings. 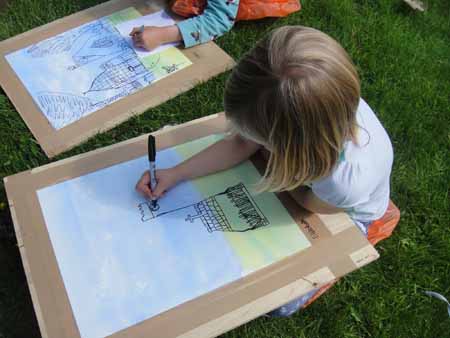 One of the things that happened was when we panned to draw the chutch form this viewpoint the children were standing up to take photos. When they actually drew, they were sitting down and the rather complicated lych gate became very prominent and the tower looked shorter. The side view is more harmonious but less recognisable as Chilton Church. 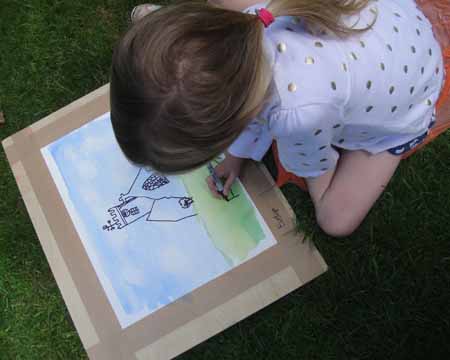 I am a great believer in drawing with somehting that can’t be erased. It means that each line is a commitment. Strangely the children don’t question being given Sharpie felt tips instead of pencils! The follow up session will be adding the patterned tissue that they printed.