« Previous: Carole, our March winner
Next: Perth – and Her Nibs »

It is so easy to live in the UK and not look beyond the rainy horizons. But in travelling and teaching abroad, I find time and again that there is such a wealth of talent beyond the channel. The workshop I gave in Perth is no exception. In fact even in Perth, calligraphers are isolated within Australia, because Perth is the largest remote city in the world. The closest large city is Adelaide which is 2000 km away.

I was humbled that some calligraphers made journeys by plane of between 2 and 5 hours. Thank you to those of you who did this. Fortunately Hermann Kilian’s work is so outstanding that he is worth studying in a group! 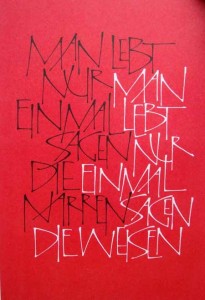 We did The Art of Kilian analysing his work and some selected elements. Kilian cannot be put  into a box as his work was so versatile, but we looked at his:

Everyone traced, copied and chatted about the letters and began creating their own letter-relationships, drawing on Kilian, their own work and other drawn letters that they liked.

I think before I go any further it would be good to introduce you to the members of the workshop.
I met them at lunch at King’s Park which is in the centre of Perth and amidst the acres and acres, there is a collection of boab trees (not baobab, South Africans, but the same family!) and an aboriginal art museum showing modern work. We had lunch in King’s park at Zamias, and here is everyone:

Karen Price, my hostess for the night, Gemma Black, who will be over here in the UK for the CLAS Festival en route to Klingspor Museum to teach and study (eat your hearts out, people!) and Liz Owens who organised the workshops. Leonie Pop did a fine job of administrating the workshop and disciplining the rowdy calligraphers. Debbie Longfield is a friend from my Johannesburg days in 1986.

Colleen was “getting back into calligraphy” but you might not have guessed that, Sue Hopkins “works from the heart”, Gaye Godfrey Nicholls published that amazing book and Patrica Barth is well known as The Family Tree Calligrapher but it’s a pity her fans haven’t seen her contemporary work.

Barbara has promised she’ll take her sketch book when she next travels and work in it; Sandra wrote a lovely article about the workshop and has a delightful Scottish accent, Trish resolved a long quotation (and did you make the chocolate cake Trish?) Martin showed me his sketchbook of Cape Town from the 80’s and brought tears to my eyes, (then me next to Martin) and Gaye ran around to get photographed twice – or you could just say she is very sociable!

Okay, that is the intros done of all my lovely new friends!.
Now for the Boab in King’s Park, which so entranced me.

It is 700 years old and when it had to be moved to make way for a bridge in Warmun, in Kimberley, Kings Park supervised it’s removal and replanted it. First there was a blessing ceremony by the Gija people, then 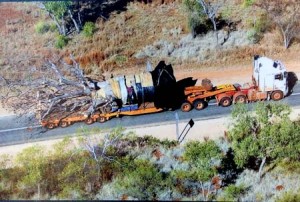 It travelled 3,200 miles to its new home. This was quite an undignified journey for a tree, however great care was taken. The bark was bruised on the long trip and the wounds can still be seen, although, 7 years later, it has recovered well. 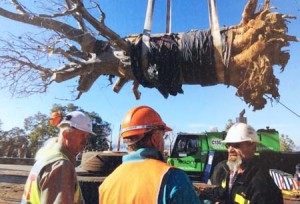 Here it is being lowered back into the earth. 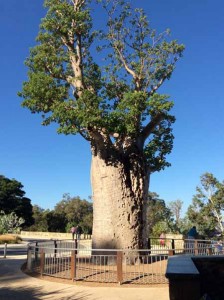 Now it stands proud, majestically – The King of the Park!

I drew it but would love to try again and do it more justice!