Tina Warren (Alphabition Calligraphy) won the April giveaway (a copy of Rope of Words) and I have asked her to tell us about herself. She is a calligrapher and a fellow South African, but we have only ‘met’ recently. You can see her work on www.alphabition.co.uk and on Facebook under the same name.

Tina Warren is originally from Liverpool but grew up in Durban, South Africa. She returned to the UK in 1985 and, after leaving a career in the City, she embarked on an 18 month backpacking sabbatical around the world with her husband, Austin. On their return she enrolled at Reigate School of Art to study calligraphy and heraldic art. 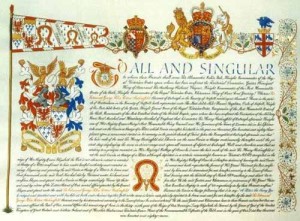 In 1997 she gained a distinction for her HND and was presented with the Scrivener’s Award by Donald Jackson. She declined an offer of a place on “The Bible” team as the timing coincided with her and Austin, buying their home in East Sussex and raising their two children. 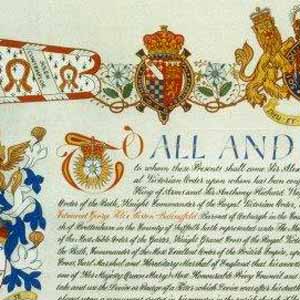 Tina has worked as a commissioned calligrapher since 1997. She is also a calligraphy tutor, teaching 3 weekly classes in Lewes, Uckfield and Crowborough as well as a series of weekend workshops. Although most of her regular commissioned work is of a formal nature, Tina’s passion is for gestural lettering and she is always delighted when a client lets her loose with this! 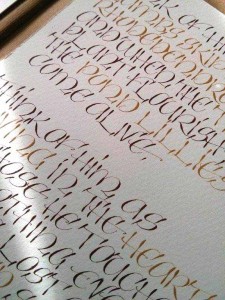 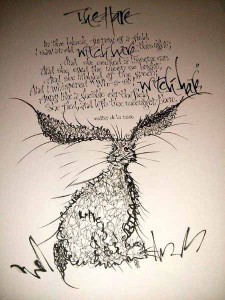 In 2013 the architect of The Shard commissioned a piece of calligraphy that was presented to Her Majesty the Queen. Tina works from her studio in Ashdown Forest with 2 rescue dogs and 5 chickens for company and regularly exhibits at The Uckfield Art Trail and the Garden Show in Firle”. 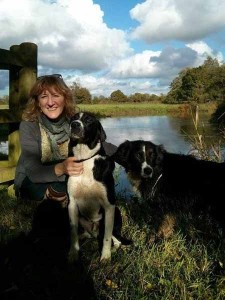 Thank you Tina. It’s a pity we cannot see the Shard piece, but of course you have to ask permission for this sort of thing. I believe that the blog is greatly enriched by the privilege of being able to show other people’s work and to share it.