« Previous: My sketch book idea
Next: Another card »

I am speakers organiser at letter Exchange and at first I used to write quite formal little thank you notes to guest speakers on paper which I had embossed with the LX logo. But later, I realised that just because they are all incredible lettering artists doesn’t mean that they won’t appreciate something more hands-on, even if my lettering skills are more humble. In fact if anything they will enjoy the hand-made touch. 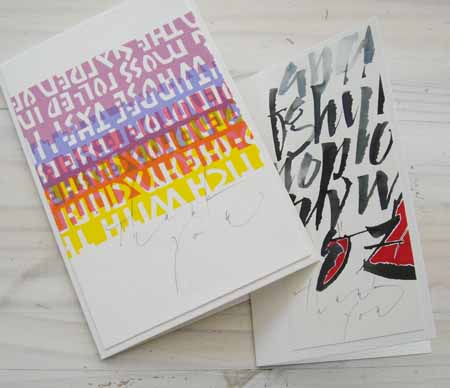 We all have scraps of artwork on good paper form discards, workshops, trials etc. Especially screenprinting. I stuck it upside down to maintain the design aspect rather than the content. So I now dig through my plans chest and find a scrap of anything with irrelevant lettering on and turn it into a card. The above ones were both really 2-minuters! (Although I painted the red bit specially to jazz up the black and white one.) 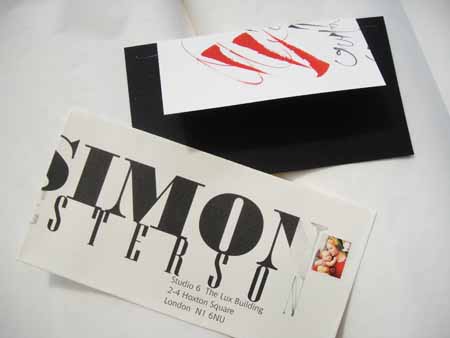 Simon Esterson gave a talk titled “Make the headline bigger” so I could not resist a nice big headline on his envelope. For some obscure reason it didn’t print properly, so I had to complete it in pencil. Then I stick this bit of brush lettering (from a workshop with Katharina Pieper in 2002) onto some black paper. I write on the inside in my normal handwriting. 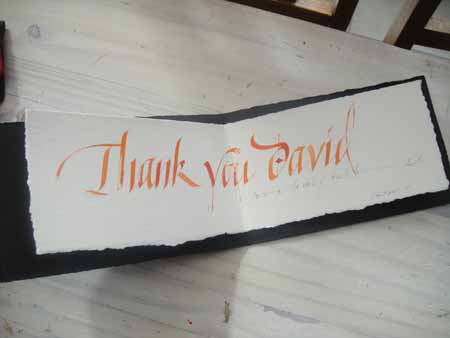 Good paper is an essential ingredient in these hurried little love-notes! A nice bit of heavy watercolour paper stitched into good black paper with gold thread. No need for anything on the cover, although I might have glued an orange tab.
This was written with a Speedball C-O and I chose these colours because David Pearson spoke about his cover designs for Penguin Books. He said it was the nicest card he has ever received!

I think what I had to learn was to stop being precious, not to worry about trying to impress, being brave about using an arbitrary scrap of old artwork and send it with love or gratitude, or both!