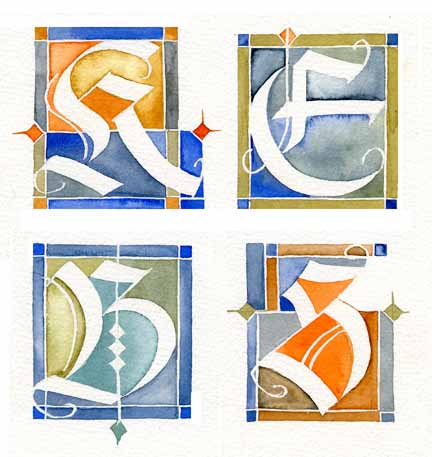 Here is a sample that I designed with Gothic Schwabach, using white letters instead of black letters.

I will be teaching some calligraphy in Singapore to a mixed ability group including beginners in April and they want a decorative script, but not Uncials or Gothic! We finally decided on a sort of simplified Italicised Gothic derived from Schwabach. There will be just one day doing lower case including writing in watercolour and one day doing decorative capitals. These were written with a balsa pen and traced.

They have a sort-of Adolf-Bernd feel in the colour use and having white lines, but his letters were on paper 38cmX56cm and my letters are each 5X6cm.