« Previous: My Chop
Next: The professional finish – paper for printing »

Today I have nicked my daughter Megan’s post’ She has a blog called The Writers Greenhouse and here she is relating an aspect of Rope of Words from a writer’s point of view.

Rope of Words is a limited fine-press edition of numbered, handbound books, the result of a collaboration between me and the artist, Lin Kerr. I wrote the story over a period of 5 years: this series of blog posts is about its writing process and the various illuminations that came from sailing straight into the rocks at every turn. At least I have the advantage of hindsight, to know the story did work out in the end – the artist who illustrated it, Lin Kerr, shared her process from the outset, with no such reassurance. You can see excerpts and images from the book here. 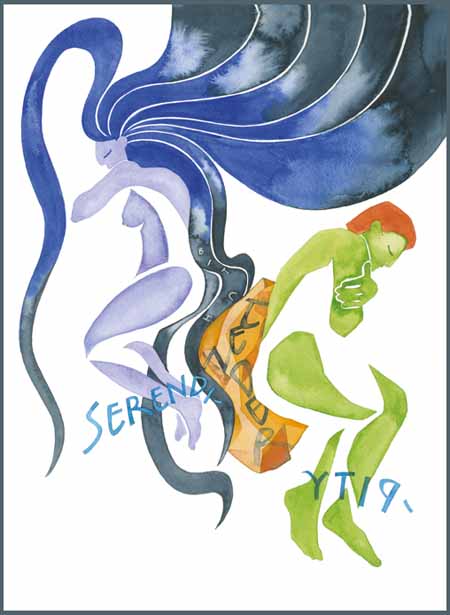 ‘In broken words, she tried to explain how she’d been reduced to those increasingly desperate acronyms and abbreviations.
“You still let go,” he said, in the words of one syllable that were left to him.
They sat on the silent moonlit moor where nothing beside remained.
“So what will you do?” he said at last. “Will you go back?”
“Back to the golden valley?” She shook her head.  “It burnt down.” She thought about all the words she’d collected and their electric charge.  “I think I burnt it.”
His face, until then as hard as an exhibit behind glass, turned uncertain. “I don’t think it can burn down.”
“It did. I saw it. I was there. Well – some miles above it and accelerating fast, but I saw the trees catch fire. Lightning hit the tower. It was very striking.”
None of their truncated words were adequate to that task.  They lay down, a careful distance apart, to sleep.  She balanced the angels’ phial against the two unwanted words that stood between them.  And they slept.’

When you’re writing a story, I believe it’s essential to be emotionally honest – which isn’t the same as writing autobiographically or even the same as literal truth. I felt especially strongly about that with Rope of Words in particular. The way that I approach “magical realism” is idiosyncratic. (I put it in quotation marks advisedly. The genre originates in Latin America, where it played a subversive, revolutionary political role. I don’t claim that history or role, only stylistic similarities.) My approach is to take an emotional event, or one particular emotion, and to make the characters act it out literally, much as dreams do. All abstraction, even all interiority, gets shorn away as every aspect of the emotion becomes physical objects and acts. (Writing for the illustrator helped with this discipline.) The result is something like magical realism, something like a fairytale for adults. This approach of addressing an emotion so directly makes emotional honesty more important than ever. And then… you get to the ending.

The ending is where storytelling and truth go to war. Most emotional crises, of whatever sort your character faces, don’t end with a grand gesture, a revolutionary decision, a pivotal moment: most of our emotions end not with a bang, but a whimper. They peter out slowly, an imperceptible fading or easing from day to numbered day, the broken jaw of our lost kingdoms or a return at last to unheard music hidden in the shrubbery. There’s no decisive battle to win. And most of human reality has that complexity. Terry Pratchett knows it: he doesn’t go for the neat endings, the goodies-win baddies-lose ending. Think of Jingo, Monstrous Regiment, Going Postal: in each case, the characters reach a point where “This was victory, but it didn’t feel like it. It felt like a mess.” (Going Postal) The simplicity of battle won, baddies defeated, is replaced with the political complexity of keeping the world going. The story doesn’t want a slow fade or complexity, though: the story wants its grand finalé and its happy ending.

In Rope of Words, I battled with the ending long after the rest of the story was complete. The narrative wanted a happy-ever-after ending; emotionally, that was a cheap and traiterous lie. I absolutely could not find my way. I spent weeks puzzling over it on long walks and eventually, in frustration I thought, Well, I have two possible endings, the honest one and the one the story wants, so let me just sit down and try to write each of them, and then I can see which one fits better. I went to my favourite coffee shop, sat down, and wrung them both out.

(Lin’s voice: I have to interject here. I had read the story and begun illustrating it and I knew I did not want to be part of a desolate ending).

Megan: When I’d finished, a couple of painful hours later, I reread them both, and realised, stunned, I don’t have to choose. I can use both of them. I can just put them together. I walked home, caffeinated up to the eyeballs, shaking with excitement. I’d just passed Oxford University Press, and there are, in sight of the Jericho tower which features so heavily in the story, I suddenly thought,Hah! And there’s another third little ending, a coda, which just kicks both the other endings in the teeth.  Perfect!  I perched on a brick wall, pulled out my notebook, and hastily wrote it down.

Telling you what the ending is would be a spoiler (though if you want to know if it’s a suitable Valentine’s gift, you can email me and ask how it ends!), but I did learn this: I didn’t have to compromise. With enough doggedness, even when it seems impossible, you can find an ending that is both beautiful and true.