The Lettering Fraternity has heard the sad news that Jean Larcher passed away three days ago.

Jean was one of the Great Calligraphers of Europe. He was born in 1947 and leaves his widow Katharina Pieper who is also highly esteemed in the calligraphy world.

Jean was skilled in many other lettering style too and if you’d like a flavour of his work look at images in Google.
I met his now-widow, Katharina Pieper in 2000 when I attended a Summer Festival in Worcester and was on her course. Many years later I was at a symposium in Sunderland where he and Katharina were both teaching and they fell in love. So our lives have crossed now and again. Jean was an enormous man, larger than life and it was always wonderful to see this huge man doing such delicate work.

My heartfelt sympathy goes to Katharina – she and Jean were deeply in love. Jean Larcher will be greatly missed by the Lettering Fraternity, for his talent, his joie de vivre, his incredible heritage of fine letters and his unstinting generosity. Jean – R.I.P. 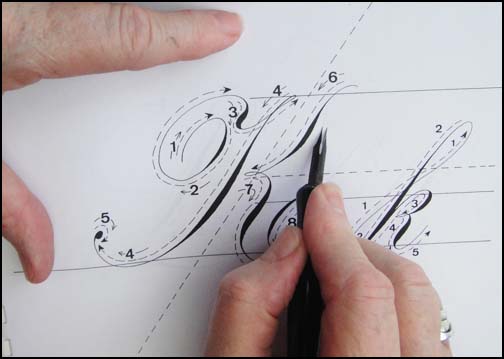 Pressure on this little nib opens to tines to produce a very wide stroke.

I met Jean in 1995 in Repton when CLAS had their first Summer Festival. At that stage I still lived in South Africa and had made my first calligraphic pilgrimage. He was the tutor for L’Anglaise which was what he called Copperplate. We were each presented with a book with one letter per page – these are probably the loveliest handouts I have ever had! I have seldom seen such lettering skill. Using a tiny little nib Rexel 303 (and no angled ‘elbow’ pen) he did the finest of lines and then with pressure opened the tines of the nib to 3mm! Have a look at the photos of his exemplar, where I have used a dry Rexel 303 nib to demonstrate.

T read more about this gifted man, follow this link.