Now for a taster of the Letter Exchange evening at Queen’s Square on the 17th December. 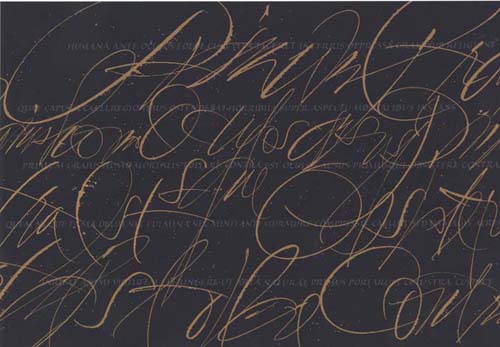 Yves Leterme is a Belgian calligrapher / lettering artist who became a full-time letterer after 25 years of teaching Latin and Greek. So it’s not surprising that he has produced Litterae – ‘an anthology of 24 Latin texts, handpicked, calligraphically interpreted and commented on’

There is an underlying unity despite the variation in technique, lettering style and ambience.

The works harmonise due to Yves’ neutral palette which is sometimes quiet and sometimes dramatic.

‘Phidias finished his work with the greatest care, even if he didn’t sell it.’

Litterae took Yves 9 months to complete and the 24 x A5cards are presented in a beautiful box. Each card is double sided with a translation and an image on the back.

There is also a booklet with an explanation and commentary and some bookmarks in the box. For more information please follow this link.
We saw these works in a sophisticated power point presentation, but also many more.Yves allowed us a peek into his (tidy) studio and showed his abstract artworks. Most of these are fairly small even though in photographs they have a sense of monumentality. There is a base of gesso, seductive tension filled marks, areas of colour and often faint words or scribbles, frequently illegible.

We did not see much of his commission work but what we did see shows classical fabulous letterforms. I have known Yves since 2002 and followed his career, and seen his work blossom from good solid calligraphy into something that is sophisticated, sensitive and fabulous.